You are going the WRONG WAY!!!

Day nine of the September Exploitation Challenge takes me way down the wrong path!!! 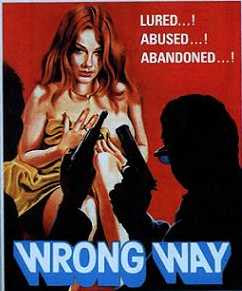 This no budget, 70’s LAST HOUSE ON THE LEFT rip off is some sort of wonder to behold. Disgusting beyond belief, if only for the truly nasty people on display and the complete lack of moral compass on the part of the filmmakers. The movie seems to exist in a climate where the filmmakers saw Wes Craven’s film and thought to themselves “Hell we can do that, but who the hell needs all that moralizing crap! Let’s just add more sex and crotch shots!” Then they realized they only had fifty bucks to make the whole movie with.

The movie begins with a group of the perhaps scuzziest criminals in Grindhouse history laying around in the woods waiting on a drug buy. They complain incessantly about how it has been days since they have had any pills or grass. One thug who we learn is named “Crabs” (because he is scratching his nuts all the time and apparently has the nasty crotch critters) is particularly upset. He complains to another cohort that he got those crabs from letting his buddy “suck him off!’ 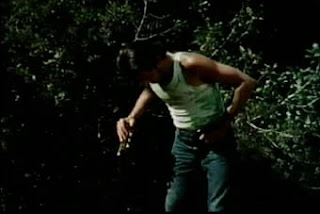 "Only reason I got crabs is cause I let you SUCK ME OFF!"
Meanwhile two pretty girls get caught going the WRONG WAY (!!!) and their car breaks down and two of the thugs trick them into getting into their jeep and heading back to the camp where these dirt balls are waiting. The bikers making the drug delivery. One of them sucks down raw eggs so his “love torpedoes can have full blast”. The main thug is thrilled to finally gets to roll a joint and has a hilarious hallucination once he smokes up consisting of a naked woman in a military beret and dreams of a winning hand of cards! All the dudes are happy to get their hands on the nubile young girls for a day of sexing on the dirt roads. 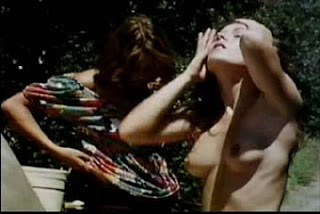 "On no! The car is broke down! We better get into some more comfortable walking clothes!"

But when the bikers discover the girls are there against their free will, they actually take a stand - “We thought those where your old ladies. We are in for any kidnapping and rape charges. You gotta let them go.” But out comes a shotgun and the bikers get on their motorcycles and ride off like little kids who just got scolded for playing on some-one's lawn. 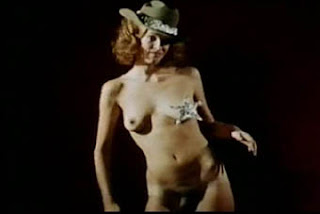 "This is the kind of Hallucinations you see when you smoke really primo pot, according to this film."
Then proceeds the twelve minute long rape scene. A scene that would be offensive if it was actually done well. Instead it is handled so poorly you can’t help but notice nasty details like the fact the guy playing Crabs hasn’t wiped his ass since he was seven years old and his entire butt is now stained bright green. Seriously, we are talking Green Giant ass here. Or that the hippie red head seams more interested in running around and touching the asses of his buddies than doing anything to the girls.  even worse is the tenth rate Bob Dylan tune that plays not once but twice over the scene trying hopelessly to ape the David Hess folk rock from LAST HOUSE ON THE LEFT. What IS effective however is the poor girls reactions to being ground on by these nasty, grungy post hippy thugs who really do look like they just got out of prison.  The takes go on forever and these actresses have to endure the constant grinding of each of this dirtbags from every angle and position. The whole thing is very disgusting and dirty. When they are done with the gang rape they just leave the girls on the road and take off, never to be seen again! 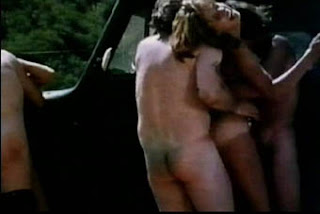 "It is really horrible enough to get gang raped by these greaseball thugs. But to have one have them has a green stained ass just makes it the worst experience ever."
Meanwhile one of the girl’s father has called the police and a search party has started. Even a helicopter is looking for them. I suspect that is the case because A) someone the filmmakers knew had a chopper or B) they had stock footage of a chopper they could use (I suspect B is the case). But the cops are making very little ground.


The girls go looking for help, stopping at a stream to was their ravaged vagina's. Naturally this calls for loving close ups. They hear people and investigate hoping to find help but instead find ANOTHER group of hippy criminals! This is where the movie takes a sharp turn away from being a LAST HOUSE rip off and into it’s own weird little territory. Seems these Hippies are some sort of Manson-esque cult and they have just killed a man. The girls has stumbled on his burial (including a two year old helping dig the grave, a nice touch!) and now this cult is pissed at them too. The cult leader decides they must join the cult and become their sex slaves and have their “will and egos broken”! 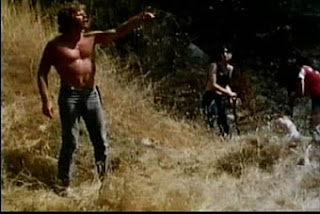 "Hey you, over there! Why is your ass all green?"

Then the movie gets REALLY weird! Suddenly we meet two older men and a really cute dark haired girl they take into a shack out in the border town this is all happening in. they explain to her they are going to take her to Mexico and sell her for Heroin. Who the fuck are these people? They try to rape her, but since she is now a junkie she relents and loves it?!?!?! The chopper sees this and suddenly the plot is now about these guys! 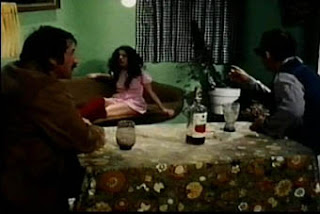 "Who the fuck are THESE GUYS?"
*SPOILERS*
The cops get a call on the radio in which we are told the police found the two girls. We get two or three brief shots of a shoot out in which one of the cult members is shot in the balls and we see them trying to rape the girls yet again. All in all the shots last about twenty seconds. The rest is recounted in voice over. The girls were found and are back home! Now the movie shifts gears to this secondary plot about the kidnappers and heroin dealers!


It is almost like some weird shit happened and that portion of the cast said FUCK YOU and refused to finish the movie. Considering the on screen treatment of the girls in the early rape scenes, and that it looked like they were going to have to do a bunch more, I am willing to bet that is EXACTLY what happened. That they just had enough and so the movie had to be rewritten hastily with what was there. It all ends with a cops confronting the heroin dealers/ kidnappers confrontation. 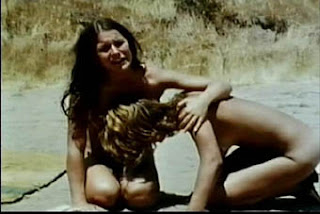 "You've defiled us, made us see the green ass guy and join a cult. We've had enough. We QUIT this Goddamn movie!"

This is one of the sleaziest and weirdest Grindhouse exploitation movies I have seen in many a moon. Directed in long takes like storefront porn, shot almost entirely outside in the woods, and cast with people who do not look like actors but seem to really be the parts they are on screen. This is nasty ass, low brown cinema at its most ghetto. I cannot imagine the audience this was meant for or where it even played. But I would have loved to have been there to see them. But something tells me they would have been so stones they would have barely noticed the movie at all.
Review © Andy Copp