Why horror fans gotta be such haters?

I'm gonna hold off on reading all this stuff if no other reason than so I can form my own opinion on the movie when I see it. This same thing happened to THE LAST EXORCISM when it came out, and I ended up really liking it (except for the ending which everyone agrees is incongruous and from another less intelligent movie).

What is kind of bothering me though is the consistent bashing of horror films that come out theatrically by horror fans on line as the films are released specifically for what ever success they may have. THE DEVIL INSIDE had a big opening weekend, so horror fans explode at everyone who went claiming they are somehow idiots (I've read that a bunch today), if a sequel or remake is successful then all remakes or sequels must suck. The monster movie CREATURE makes it into theater in a wide release with thousands of prints without the help of a major studio (you know like used to happen to indie movies years ago) and there is a backlash that used to only be for child molesters...

I'm not necessarily defending all these movies. I haven't seen THE DEVIL INSIDE or CREATURE. I want to see both of them. I meant to see CREATURE but didn't even know it was playing my town until the week after it was gone. My fault, not the distributor's. The complaints I hear about THE DEVIL INSIDE sound somewhat legit, a bad use of a tired cinematic trope with the found footage thing and an ending that should of been the beginning of the third act. Fair enough. But that doesn't explain why horror fans want to hate so much. It seems to me that no other fandom inspires so much direct and outright rage, directly at the filmmakers and films themselves. So many fans go into the film's or even the reading up and discovery about the films looking to RAGE about something.

If you were super excited to see the particular movie, and it turned out to be really bad, I can understand being upset. Or if the movie starts out really great, but becomes a total mess and lets you down, I can even understand that. I get the remake thing, though I have calmed down about it considerably over the years, as many of the films have gotten better, and most of the originals have been gorgeously remastered for Blu ray and look BETTER now than they EVER did. But none of that seems to be the real problem. There is just an overriding sense of anger and disenfranchisement that hangs over the fandom that explodes in the cybersphere at the drop of a hat.

You don't see these fans discussing what WORKS in a movie. Almost never. But you always see discussions of the things that were messed up, and should have been done better. About how this particular director has gone way past their useful date.

It is a curious phenomenon, one that sometimes makes being a fan a little unpleasant. I sometimes can do it too,and am aware it it. But more often than not I want to be moved by a movie and look for that to happen. I go in to even the biggest piece of shit rooting for the movie to do its job, which is entertain me. Not make me walk away an angrier person.

GUROZUKA: Ghosts and gore for teens? 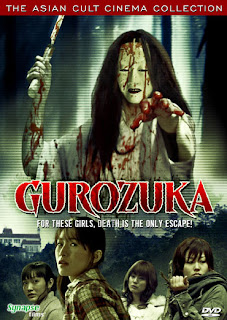 Another offering in the Asian Cult Cinema line for Synapse Films; this new film from Japan is atmospheric and has some startling images sprinkled throughout. But unfortunately it is not the strongest release they have put out from the Far East. Borrowing heavily from THE RING and other ghost films popular in Japan then welding them to the the teen slasher cycle that had burned itself out in the late 90's, GUROZUKA never really comes to life on its own terms.

The film begins with two twenty-something young women who find a startling 8mm video tape that shows a Goh performance that ends with the performers murdering each other. Then these girls and a whole other gang of young ladies go on a road trip together. They are part of a movie club going to a remote house to make a short film together based on the rumors of the former club members disappearance. Naturally the killing on the tape and those missing girls are linked. Soon the ghostly Goh masked killer from the tape is spooking his (or her) way around the woods and cabin picking off the girls as they try to figure out how it all fits together. 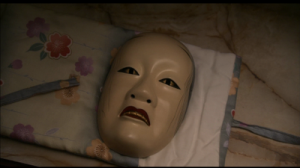 The movie is as much,if not more, a teen mystery, as a horror movie and is surprisingly tame, even once the blood splattered climax approaches. There is no nudity, and though there is some violence, it is not particularly outlandish as one would come to expect from Asian cinema. The set up of the film reminded me a lot of the movie EVIL DEAD TRAP but never reaches those heights of fear or delirium. In fact I kind of wonder if this wasn't aimed at a youth audience in Japan, with the cast of pretty young girls, but extreme lack of exploitation. If that is the case, the movie works ok, though is a bit on the slow side. If it is intended to be a film aimed at adults, then it is too little to really satisfy. 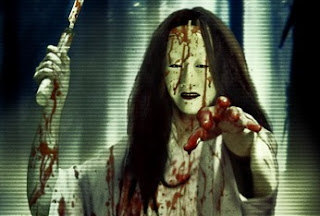 The film is certainly well made enough, but as far as Asian horror goes this is kind of middle of the road.

The disc comes with a fun behind the scenes and a trailer.