Day 17 of the September exploitation challenge made me a warrior... 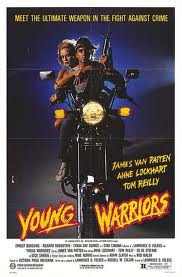 
For some reason I don’t quite understand this movie gets shit on. A lot. The first review on the IMDB gives it one star and goes on to say the only way you can classify it as a crime film is that it is a crime that it was even made. I’ve heard plenty of people put it on their worst ever lists. But I have to wonder if people even watched it past the forty five minute mark. Because I found it to be one of the best, most refreshing action movies from that era. It is like the anti-DEATH WISH. A vigilante movie that dares to ask the questions that most of the other films of that type would never ask. Putting a very human face on the misery and pain that killing people actually requires. But maybe that is just it. Most viewers of exploitation movies, really are not looking for anything deeper than those visceral kicks the base elements deliver. Which is fine and good. But it doesn't make a movie that DOES give you more a bad film.

YOUNG WARRIORS starts off really odd as it is an ANIMAL HOUSE styled college frat comedy for the first twenty minutes or so. We hang out with a group of young men who are basically enjoying life. Rushing their fraternity, hanging out with girls, getting laid, being silly and living it up. The movie may spend a little too much time with this, but it is all pretty harmless stuff. We mostly get to know Kevin Carrigan (James Van Patton) who is sort of the leader of his group of friends. A frustrated animation artist and jocular good fella. He butts heads with his policeman father played by veteran Ernest Borgnine over the bet way to handle crime and whether he should follow in his dad’s footsteps. He is very protective of his little sister who is in her last year of High school.

On her prom night on the way home a mysterious black van runs his sister and her date off the road. They drag her from the wreck and brutally gang rape her. The car explodes killing her date, and she dies from her wounds in the hospital later. Their Father manages to put together from the meager clues that it was a black van but not much else. But something in Kevin changes. He stops being the young guy into having fun he was, and needs to find revenge. Or at least do SOMETHING to change what happened. After an aborted attempt to go to a bar they have pieced together the killers might hang out at, Kevin and his friends decide to become a kind of citizens activist group. They begin to hunt the night looking from both his sisters killers and criminals in general in an attempt to take positive action.


Almost immediate things go wrong. One of their friends is murdered. Things become more and more complicated, as they amass more weapons and more chances to find their way into the criminal world.


What sets this movie apart is that it takes a great amount of time to study the aftermath of the violence. Kevin’s state of mind is really the whole focus of the movie was we watch him melt down from regular guy to, mental mess, to killing machine at the finale. We watch him become confused, alienated, cold, and mentally destroyed. We also observe how vigilante justice really has a lot of dirty loose ends, such when the gang kill a couple of kidnappers they have seen snatch a women, only to have her be just as horrified at the level of mayhem they have just caused. To an armed robbery they stop that is nothing like what they thought it was. All of it leading to the fact these kids have become cold hearted murders not unlike the men they have been hunting.


For a small little drive in movie it is really heavy stuff. The climax is really powerful and well handled, closing it all off really well. If the movie has any real problems it is in the casting. The young cast is not seasoned enough to pull off the emotional weight the piece requires. VanPatton is okay and tried really hard, but is never quite as strong as the part needs. His buddy played by Mike Norris (son of Chuck) is equally lost at sea. The females fair a bit better with the ignored girlfriend played by Anne Lockheart actually fairly well done. Borgnine seems kind of miscast and probably was their for name recognition only. Though Richard Rountree is good as the partner.


This movie got caught in a shit storm of legal battles when it was finished as Cannon films basically tried to totally rip off the filmmakers and in an unprecedented move the filmmakers sued. This held up the movie’s release for three years, eventually they won but the victory was small at that.

Why this movie has not gotten the attention it deserve I do not know. It is not on DVD, and is rarely screened. With the recent releases of Folds other movies MALIBU HIGH and DON’T GO IN THE PARK you would think somehow this one would get its due. It really deserves it.
Review © Andy Copp
Posted by Andy C at 7:34 PM