It is brutal TO BE TWENTY 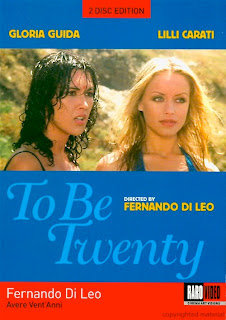 Italian director Fernando Di Leo has managed a small resurgence as of late thanks to the fine work of Raro Home Video's DVD's special editions. His large body of Italian crime thrillers have finally started to find their way into the hands of cult films fans who are discovering the craftsmanship of this little known (on this side of the pond) director. TO BE TWENTY is largely considered to be his most controversial and confrontational piece of work. A huge failure in Italy when it was released to the point that it was pulled from release and re-edited, it is a film that challenged audiences and critics alike.

The film follows two twenty year old girls Tina (Lilli Carati) the brunette angry one, and Lia (Gloria Guida) the more angelic looking, quieter and calmer of the pair, as they go on various adventures over a week or so on holiday in the big city. Seems like a simple enough story, ripe for comedy or coming of age, until one realizes that Di Leo is much more interested in telling a story about how society of the late seventies, a time ripe with the burgeoning feminist movement, civil rights activism and other liberal activities, is simply not as free as it often purports to be. The two lead girls are the symbols of freedom as they rage against the old world society, the establishment and even their peers who seem to be using the various movements they supposedly believe it just to make a buck or lay around and get high. They dance through various adventures trying to find a place to fit in, and listen to the philosophy of a mime who explains about trying to find transcendence, the commune leader who is using the young people, and the sexually aggressive pseudo hippie who is actually an informant for the brutal cops. In one telling scene they go door to door selling encyclopedias to make money and are almost molested by a lesbian and a professor, but end up together finding a lonely old man they end up seducing on their own to ease his own loneliness as their good deed for the day. Another telling moment has a documentary filmmaker crash the commune and they spill their guts to his camera explaining their sad childhoods. With Tina raging about her bourgeoisie upbringing and how her parents make her sick, and Lia telling a sad story of growing up in an orphanage and later with a foster care at which she was molested by her caregiver. (In the extras director Di Leo explains these asides where actually the actresses ad libbing their own life experiences to what they thought was a separate documentary film crew, not fully aware it was ending up in the final film). 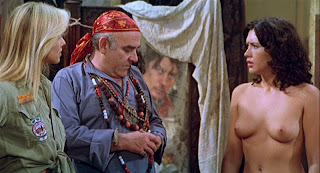 Eventually the cops raid the commune and send the girls packing when they realize they have nothing to do with the actual day to day activities there, but they could potentially “become terrorists” due to being some what intelligent. On their way home to their home town they stop at a small diner full of blue collar workers and businessmen whose libidos their very presence happen to inflame leading to a shocking, devastating ending.

When the film was released the two female stars (who are stunning and gorgeous) were very popular in Italy so audiences were not prepared to see them in such a shocking and upsetting film. Once the word was out, people stayed away and the producers pulled it, cut some troubling moments in the center of the movie and vastly changed the last five or so minutes changing the entire meaning of the film. But that version flopped too. 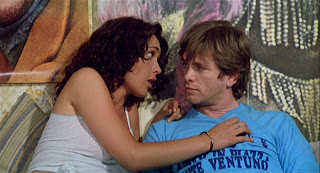 It is easy to see why. Not that it is a bad film. Far from it. But TO BE TWENTY is a vastly unpleasant one. It comes from that time in 70's cinema when movies were asking hard questions, and were very unafraid to just up and fucking brain the audience to get the point across. If that meant doing really terrible things to the young, beautiful, much loved leads, then so be it. But with this film it is much more, because TO BE TWENTY takes young, beautiful, vibrant and sassy freedom itself out into the woods and savages it beyond recognition. This is nihilism laid out to die alone with businessmen in three piece suits and their cronies walking out to fuck everyone else for another day. TO BE TWENTY is where freedom goes to die.

The DVD has both versions of the film in this 2 disc set. I only watched the directors cut. The second disc that is the Director's cut has some weird anomalies as it slips out of sync two times really bad. The sound stays that way for close to 30 seconds or more both times. There is also some pretty severe print damage along the way. But otherwise it is ok looking, certainly a huge step up from the smeary VHS dubs I have been used to looking at over the years.

Highly recommended for those who want to be challenged by their cinema. All other may want to be careful. 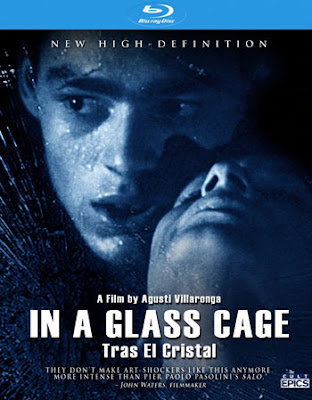 There are a lot of movies anymore that claim to be the most disturbing movies of all time. Last year A SERBIAN FILM sexually assaulted audiences, brutalizing them to the point that criminal charges were filed at a film festival in Spain. While that film is everything you have heard and more, it lacks a certain poetry; a lyricism to it's violence. So while A SERBIAN FILM manages to violate you, and scar your psyche, it fails to engage your soul. But there is another film that hit the scene twenty five years about that was the sensation of the time, that did all these things and more. A film that was so shocking when it came out that almost all film festivals refused to play it, leaving only Gay and Lesbian festivals to embrace it, and even there it left audiences shocked and destroyed. But it was horror audiences who found the film through the underground critical writings of Chas Balun who praised the film in his DEEP RED magazine calling it the only film to scar him on a spiritual level. 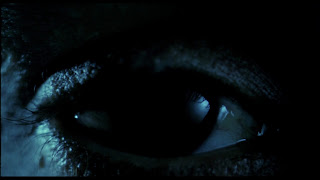 IN A GLASS CAGE is a film that is so distressing that it is a film that almost has to be confronted as much as watched. But unlike a film like A SERBIAN FILM, this is not simple shock machine, no aggressive attempt to piss in the audience's faces and make them feel sickened and disgusted. IN A GLASS CAGE is an honest attempt to look evil in the face, to explore the circular nature of evil. And even more distressing, it is a really upsetting love story.

The film opens with a scene sure to upset the hell out of those more sensitive types. An old man named Klaus (Gunter Meisner from THE BOYS FROM BRAZIL) has a naked teenage boy strung up in an old stone building. From the old man's behavior it is clear the scene has been that of a sexual nature. Someone is outside of the building watching through the window. The old man takes a two by four and beats the boy to death. He then heads to the roof and throws himself off. But not before who ever was watching could gather the books and diaries scattered about that the man left behind. 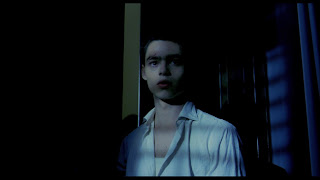 The movie proper starts, with credits playing over scenes of young boys in Nazi prison camps, letting us know the scene we had just watched was happening in during World War two. Then the movie picks up eight years later and Klaus is not living in a villa under the care of his wife, maid and young daughter Rena. He is confined to an iron lung due to being paralyzed from his suicide attempt. His wife, who is at the end of her rope from caring for him is in need for a live in nurse. A Handsome young man named Angelo (David Sust) mysteriously appears, and though his wife immediately hates him, he takes the job. Klaus and Angelo seem to share a secret that connect them in the past, and soon Angelo is tearing his way through the family. He begins to sexually abuse Klaus, turn on and off the iron lung, and repeat his more terrifying experiments form the prison camps with children from the surrounding neighborhoods. 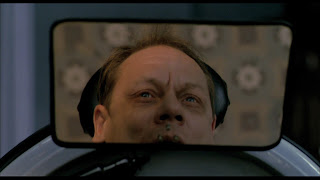 The film is a terrifying look at how evil spreads from one incident, i.e. a war, or a moment of unmitigated sexual abuse, and spreads through time like ripples on water. Klaus and Angelo are destined to play out their dance of evil together to the point it almost feels like a love story. But also playing into that is the character or Rena, Klaus young daughter who does indeed fall in love with Angelo, to the point that she clearly sees the awful things he is preptrating in her home, to her Father. That she learns the evil that her Father once was, and that she too will perhaps inherit the cycle.

But make no mistake, IN A GLASS CAGE is no fly by nigh shock machine, it is a measured, thoughtful and at times hauntingly beautiful film that happens to deal with some of the most hopeless and sad material humanity could possibly offer. Agusti Villarongo has fashioned a truly disturbing film, that is also deeply poetic, visually stunning and achingly heartfelt. It is disturbing because it is so damn HUMAN. Human in that it shows the worst the human animal can offer. 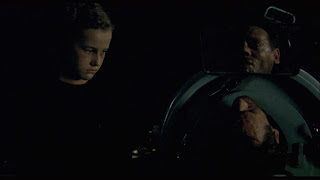 Cult Epics new Blu Ray and DVD is a significant upgrade over their previous DVD edition. While that edition was naturally a HUGE step up from the washed out murky VHS available for years, there was some sync issues, and subtitle issues on that previous edition and a distinct lack of extras. This new HD transfer is much cleaner with nice accurate colors (though the black levels seem a little lacking in detail at times to me). The Steel blues and grays are all very well accentuated. The extras include three of Villaronga's older short films and two fascinating and lengthy interviews that shed some light on his goals in making this now infamous film.