Man that cat is one bad DUDE!!! 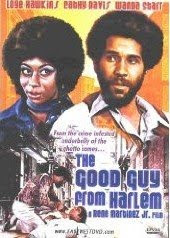 This is a blaxploitation epic for those who felt that DOLEMITE was too polished and high tech for their tastes. A dime store circuit classic that for reasons unknown to this viewer has yet to get the cult status it so richly deserves. Imagine a ghetto action movie, minus the choreography to pull off the action, directed by folks who seem to have only seen store front porno movies, but are way too shy to actually shoot any on-screen sex. Hire a lead actor who consistently looks like he has either shit his pants or might cry at any given moment as your bad assssss title hero from Harlem, but set the whole shebang in Miami ('cause the title THE GUY FROM MIAMI doesn't really have a great ring to it, does it?) and you are partially there. Then find a bunch of day laborers, convicts and back street radicals to fill out the supporting roles and you might come close. To make the whole films feel just right you would need to scout locations with the most eye punishing day-glo seventies decor possible that had to blind the junkies crazy enough to actually come see the inspired trash and you might land a butt nugget comparable to this anti-classic known as THE GUY FROM HARLEM. 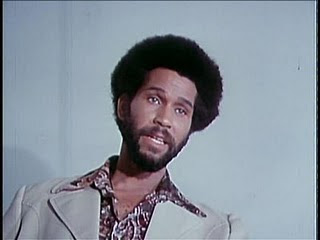 "Bitch, I'm the GUY FROM HARLEM!"
The flick stars blue-eyed brother Loye Hawkins as Al Conners, aka The Guy From Harlem, a black private dick who's a whiny sex machine to some of the chicks when he isn't running a cut rate detective agency. When one of his pals from up north in the CIA arrives with a job he leaps at the offer of $2000 to help out. "Two thousand dollars! For that kind of money I'll do what ever the hell you want me to!" he exclaims. Turns out the gig is easy street. They just want him to watch over an African Princess who is stopping over in Miami and they know the local Mob is gonna try to kidnap her. Seems the CIA has a leak and they only trust The Guy From Harlem. What they do not trust is his raging libido, because they warn him about sixty five times not to sleep with her as it could cause an international incident. They proceed to stress over and over that "she's cute, real cute, a real looker. But it could strain international relations." Then they tell him they have to pose as man and wife while he looks after her so the mob doesn't catch on! From there it is only a ticking clock before he slips his dick from Harlem into her majesty's secret cave. The moment he meets the Princess (Patricia Fulton and about six tons of blue eye shadow) she bitches about how much she needs a body massage from the rough plane ride. Hint Hint. 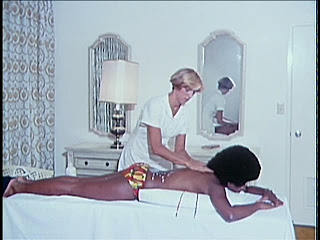 "Honky assassin masseuse at work."
Eventually he shows her some class by ordering room service for the both of them. Two New York strip steaks and a bottle of J&B scotch! When it arrives the poor maid delivering it is struggling to push the cart over the two inch orange shag rug, like someone from LAWRENCE OF ARABIA pushing a buddy over a sand dune. Then suddenly Al jumps up and punches the bitch out cold! POW! The princess flips out; "Why'd you hit her?" To witch Al exclaims "It was a MAN, baby!" and he rips off the maid's wig to reveal a knocked out cold dude. "I could smell a good New York Strip steak from a block away!" and he pulls open the tray to reveal a pistol underneath! Maybe The Guy From Harlem is useful after all! 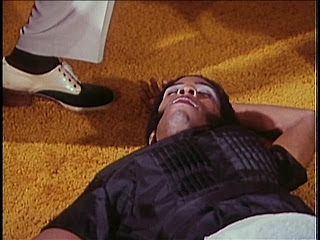 "It's a MAN baby!"
He takes the Princess to his white girlfriend's apartment, saying that it's safe, before shooing the cracker ho out the door for the night, so he can get down to making the beast with two backs. But remember earlier when I mentioned the filmmakers being too embarrassed to actually show any real skin? They start making it and the movie cuts to not only the next morning, but hours later and Al has sent the princess on her way. The plot is over and she has returned to wherever the hell she came! And the movie isn't even half over yet! Then we meet some street thugs who hire AL to do a drop of some drugs and money to someone who works for head mobster "Big Daddy" who are holding their daughter for ransom. Al is smarter this time and asks for much bigger money of $2,000. When he asks who Big Daddy is, Al gets one of the best descriptions of a villain in movie history: "the thing is nobody knows what Big Daddy looks like, very few people have ever seen him. All we do know is, he's a white guy who is six foot two, with blond curly hair. And man, you talk about muscles... he's got the biggest muscles! And he wears bands around his arms. But nobody knows what he looks like. Nobody's ever seen him!" Naturally when Al walks right past him in a gym the very next day while setting up the delivery, he doesn't even notice him! 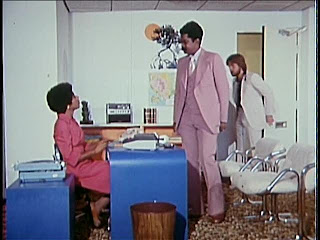 "When the CIA arrives, people listen."
Meanwhile we meet Sue (Wanda Starr with the biggest Afro in screen history) the girl he's supposed to be helping. She's tied to a chair in some cabin in the woods with a honky tormenting her. Some big muscled, wife beater shirt wearing, mullet headed bo-hunk motherfucker, who vacillates between calling her a nigger, and trying to paw at her dark chocolate titties. Funny thing is that no matter how aggressive he gets or mean he tries to be, this tiny little women, who is bound and tied, still manages to fight him off, kicking him in the balls, pushing him away with her feet, talking shit to him, calling him a honky. And he backs down at very turn. When he finally gets made enough to throw her to the flow to attempt to rape her she wiggles out of her ropes to which he yells "Damn, I knew I should have tied those ropes tighter!", and it becomes glaringly clear that wasn't in the script! She slipped out of the ropes on her own! Outside The Guy From Harlem has infiltrated the compound and is whooping the asses of all the dudes that are guarding the place in some of the most insane action scenes ever put on film. Seems The Guy From Harlem does his best fighting from the ground. A typical fighting move being to kick his legs like a little kid throwing a temper tantrum. The ending is action packed, but I don't want to spoil how it all goes. 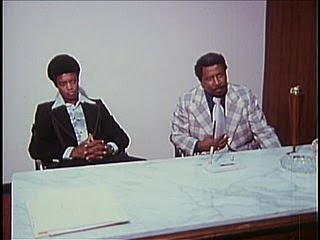 "Real mobsters wear scary suits."
Some movies are bad. They throw money at the screen trying to cover ineptitude. Then there are movies that wear that ineptitude like a badge of honor. Then there are movies like THE GUY FROM HARLEM, that are completely fucking clueless that they are inept at all. It exists in a bizarre universe where time and space stand still and only craptastic spectacular nothingness like this remain. I'll take this over a $200,000,000 piece of shit any day of the week. In fact, I am ready to watch this one again.

And I haven't even mentioned the incredible theme song the flares up when the main character walks on screen, or takes off his pants, or the boom mic that gets as much screen time as most characters, or how each scene is covered in medium shot, or how it is all lit from one giant light. The list goes on and on. Amazing. Truly and utterly amazing.