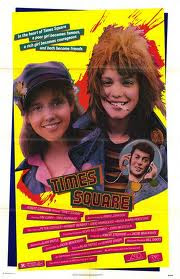 
The story deals with a teen girl named Nikki (Robin Johnson who is really superb) a young delinquent with apparent mental disorders. She checks into a mental health clinic to get some brain tests at the same time as a Mayoral hopefuls daughter named Pamela Pearl (Trini Alvarado). Pearl spends most of her time day dreaming and writing poetry that she sends to the local late night DJ played by Tim Curry. Seems she also has some sort of mental disorder, that causes her to have some sort of dissociative fits. Naturally the girls bond and they run away from the facility and into the City, where they find a squat and begin to live together. This is where the movie becomes some sort of teenage empowerment fantasy as the girls, not only find jobs, but slowly become folk heroes as the DJ covers their disappearance on his radio show, encouraging them to be free. Eventually Nikki discovers she has real talent as a rock singer and they end up calling themselves the “Sleezy Sisters” inspiring a mini revolution among the bored and apathetic teens of New York to be unique and not take any shit(?). 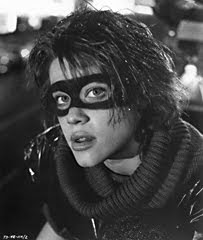 The problem being that a lot of the progress they are making is clearly being born out of Nikki’s mental illness and need for fame and someone to love her. Her activities become more and more dangerous (the girls begin a trade mark of trowing TV’s off of tenement building roofs to get people’s attention) and she may even be responsible for the drowning death of her previous friend.


As I mentioned earlier the movie’s biggest problem is that it creates a fantasy world for these girls to live in, that deflates the drama around them. For example they easily find work in a sleazy dive bar/strip joint even though both of them are clearly about fourteen years old. The owner (played by famous prison play write Miguel Pinero) agrees to not make them strip nor makes any sexual advances on them. In fact the big city, and Forty Second St. in particular, is kind of de-sexualized. All the porn shops are shown as are hookers and trannies, but no one makes any sexual advances on these teens alone in the city streets at any time. Their fantasy of living alone in the big city is never broken at all. They never go hungry, never get robbed, never get taken advantage of, never have problems getting anywhere. Things just fall into place for them unless adults of the cops are screwing it up. 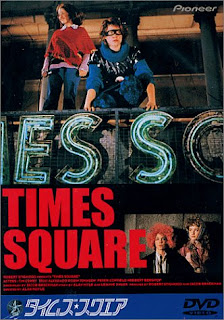 So in a way it is almost an exploitation movie of teenage girl fantasy wish fulfillment about being a rock star, being alone in the big city and making that best friend that changes your life. It is a parable about how letting teens be who they really are, and not forcing psychiatry, drugs and the parents old fuddy duddy ways can make for a better and brighter future. Director Alan Moyle would basically remake this same movie in 1990 with a superior film in PUMP UP THE VOLUME, dropping the mental illness angle, and pumping up the angst. And once again using a terrific modern music soundtrack.

Whoever cut this trailer did a great job.
Posted by Andy C at 2:46 AM