Who okayed Rape on TV?

Day twelve of the September exploitation challenge takes me into the woods and on TV.
REVENGE FOR A RAPE (1976)
D. Timothy Glafas
Made For TV
Full Frame


Probably not the most common storyline for a made for TV movie, this outdoors drama follows a Travis Green (Mike Conners) and his wife Amy (Tracy Brooks Swope) as they go into the woods to go fishing and take pictures of nature. Low and behold they didn’t think about it being hunting season and every yokel with a gun and a six pack being out there with them. We know from the opening frame of the movie bad things are going to happen because some shitheel hunter in the local store looks down the sights of his gun and this is what he sees... 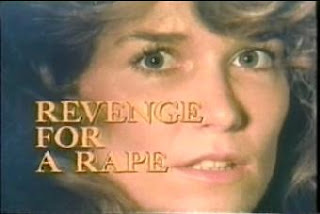 If that freeze frame doesn’t set up a film, then you are deaf dumb and blind! the couple are your typical Liberal natural loving peaceniks too, so you just KNOW they are going to learn some hard lessons on this trip. Very soon we learn that Amy is pregnant as well (the movie just keeps laying it on thick and saucy) and that Travis has a hair trigger temper when some bumpkin makes a crack about her being a hot piece of ass in the local grocery. By the afternoon’s end Travis is out fishing and tree faceless goons have cut their way into her tent and gang raped her (off screen as this is a TV movie after all).

After a hair raising trip to the hospital through town, where Amy spots the three guys and Travis gets in a fight with some cops trying to get to them, she ends up at the hospital where we learn that, not surprisingly, she has lost the baby. Even worse they damaged her to the point she will not be able to have anymore kids. Naturally the men folk decide she doesn’t need to know this fact for a while. 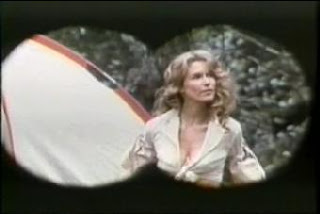 "She's just out in the woods, strutting her stuff for all the nasty hunters to see..."

Meet the Sheriff played by TV favorite Robert Reed. When I saw his name in the credits I was hoping he was going to play one of the rapists. I mean what a career turnabout that would have been for Daddy Brady to play a low life sexual scumbag. But no such luck. Instead he plays the laziest cop in TV history. He tells Travis that his wife was raped at “a very bad time” and that “the guys will most likely never be caught”.  While he swigs back a beer at his desk. So naturally Travis ends up doing what any sensible and angry husband would do. he follows the scuzz buckets into the forest to try and take matters into his own hands. 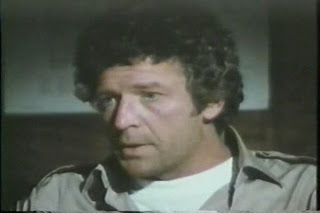 "After The Brady Bunch you actually expect me to get off my ass and find some rapists?"

He tracks the three goons and commences with some cat and mouse shenanigans that end up feeling more like DELIVERANCE than I SPIT ON YOUR GRAVE. But after he has killed the fat man, the movie pulls a curve ball on us (though one you can see coming if you have paid attention) and the Sheriff turns up at the hospital to see Amy and has her identify three dudes who turn out to be the REAL rapists! Oh Snap! Travis is out killing three innocent dudes, he thinks are the guys! Never mind that the Sheriff never got off his ass once to actually find these guys. 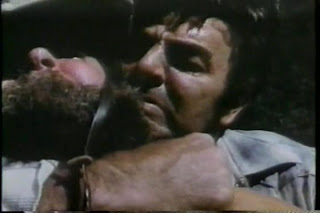 "He's really not doing what it looks like he's doing here."

There are also these sugar sweet flashbacks throughout the second half in which we get to see how Travis and Amy met, got married etc. That are sure to make you more sick than any of the violence on display. you also learn that they have lived in a small mountain town for several years, so you would have thought they would have known all about hunting season, and the dumb-asses who would be out there during that time. But now such luck because they live in their own little closed off world of happy love. Yeuch. You’ll be happy when Travis picks up the hunting rifle and starts blowing people away if only because he wont be having another flashback. 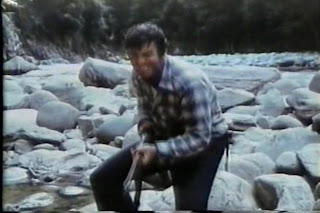 So ultimately the movie is trying to make some sort of point about vigilante justice and how it never works out. About how the wrong people can just as easily end up dead and how it turns the angry into monsters. But it provides a few thrills along the way and the last act is surprisingly violent for a made for TV movie of the week. But the title is a misnomer as there really is never any “revenge for a rape” thanks to that plot twist.
Review © Andy Copp
Posted by Andy C at 4:08 PM