These Punks have their own theme song!

Day ten in the September Exploitation challenge takes me South of the Border once again! 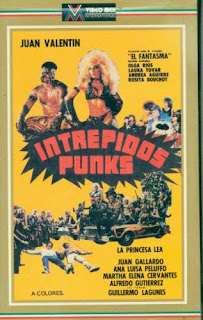 This is some movie! This insane import from Mexico literally has it all. Crazed bikers that have more in common with the gangs from Walter Hill’s THE WARRIORS and MAD MAX than any kind of reality, busty Amazon women that would be right at home in a Russ Meyer movie, a bad guy named Tarzan clearly played by a wrestler, bloodshed out the wazoo, non-stop mayhem, middle aged women talking about getting banged in orgies, a home invasion involving said middle aged women that turns into a gang bang that suddenly has a rock and roll house band appear to play the theme song (a band called THREE SOULS IN MY MIND if you must know), mutant bikers with Freddie Mercury facial hair and two tons of make up played by men who clearly are taking days off from their office jobs, and a punk rock theme song that plays when ever the villains roll into a scene! Why the hell doesn’t this movie have a HUGE cult following? 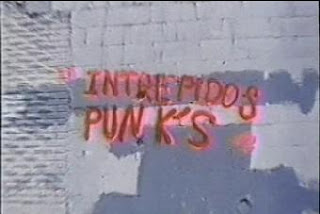 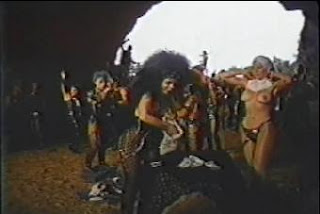 "Mama Mia! If all Nuns looked like this I would have gladly stayed in Catholic School!"

The movie begins with some babes dressed as hot nuns robbing a bank and blowing away the security guards on the way out the door. When they reconvene in the desert they strip off the outfits to reveal their studded leather biker duds (and the lead to reveal here incredible naked body and 34 dd’s!). This is when we realize they aren't just any simple bank robbers, but a gnarly gang of bikers that number in the dozens. Soon their hot leader named Beast has master-mined a prison escape for her man Tarzan by taking the prison warden’s wife and friends hostage. Of course she lets her biker buddies have their way with them first (which is where that house band I mentioned comes in!). The Warden doesn’t believe her at first so Beast cuts off his wife’s hand and mails it to him for some old fashioned convincing!. 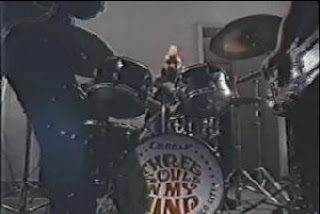 A couple of middle aged, wise-cracking detectives get put on their case because they are the same guys who originally put Tarzan away. I suspect these two dudes most be some sort of Mexican comedy team or something. Because they seem like they are important from all their screen time and jokes. But their material is the least important in the film. 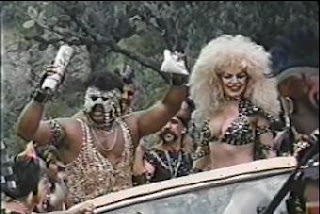 "We have good Blow and primo Maryjane for you all to groove with!"

Though to be fair they have a couple of shootouts they are kind of impressive, each with a shot involving a mirror that caught me off guard.

The gang continues to roll into parts of town and simply cause havoc, either setting people on fire at the gas station, robbing places, or pulling heists on the mob so they can get more blow and Maryjane. 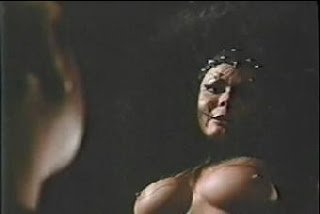 "This character's name is TITS for obvious reasons."

All the while having bitchin parties where they screw their brains out and play Russian roulette. A particularly out of sight scene has them invade a mining job site and rob it. But the miners don’t take to it so well resulting in a mean rumble that leaves a bunch of dead bodies and one poor sod run over by a bulldozer! Tarzen runs around busting out wrestling moves left and right, piling driving people into the ground like he is trying out for the big leagues. 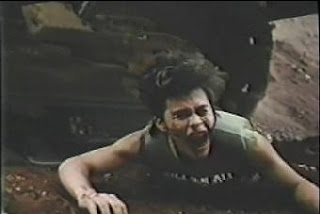 "Bulldozers and bad guys do not mix"
Eventually those silly cops get caught by the gang and it all ends in a fairly impressive showdown with sqibs a plenty and a lackluster final bit of fisticuffs. 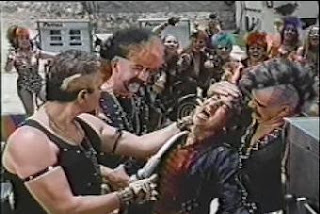 "What happens when the INTREPIDOS PUNKS stop at the gas station!"

I first caught wind of this beauty almost fifteen years ago when VIDEO SEARCH OF MIAMI sent out a free sampler tape to all their customers. That tape had a clip on it of the Russian roulette scene and from then on I was interested in the movie. It took me probably eight or so years to get a copy and another few more to get one with subtitles. But for whatever reason I never watched it until now. I have a bad habit of doing that, searching and searching for movies, and once i get them, they go on the shelf until i can get time to view them. 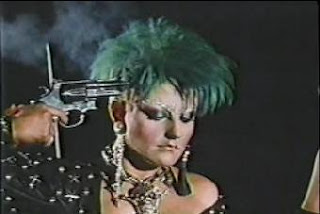 "Russian Roulette the INTREPIDOS PUNKS way!"
This one was well worth the time and effort to see. Truly a bizarre and out of control monument to berserk film making. By no means a good movie, but a completely energized one. A movie where all notions of good taste or even what normal film making is supposed to be are thrown right out the window and replaced with a fever dream of dementia. See it!
Review © Andy Copp