This ambitious 35mm feature from Australian underground filmmaker Wolstencroft is almost like a love letter to the work of Noise music artist Boyd Rice who also happens to star in the lead role. Rice's philosophies on fascism, racial aesthetics, cultural S+M and many other things are quite present throughout the narrative. This is a unpleasant and challenging movie, that in many ways is a breath of fresh air, even if it is trying to offend you.

Boyd Rice plays Daniel, a hitman who takes hi work very seriously. Irregardless if he is snuffing out political targets, or simply homeless people who are clogging up the Melbourne streets. Him and his two assistant buddies get a kick out of the existentialism of their work. Daniel has a live in girlfriend named Christy (the busty Lisa Hutchinson) who doubles as a dominatrix who has become bored with her work because she cannot take the clients to the ultimate edge that would be killing them. Daniel spends a lot of his free time watching documentaries about Hitler and the third Reich, ruminating about the Fetishism of the Nazi's and how the Fascism involved was something that should have been appreciated more for the sheer misanthropy and movement of will it took to achieve. He also spends much time philosophising about the S+M culture and societies need to be dominated and controlled. When he is not killing clients, he is having group sex with another couple, or debating the merits of violent movies with them. He finally gets another gig to kill an author named Morton Buggs whose erotic fiction us stirring up extreme fanaticism in the underground. Seems that is is more than just pornography but an extremely politicised tract that is causing quite a little rebellion in the way people think. As Daniel researches Buggs he starts to realize there are more questions out there than things he has clinged too, leading to a climax that is actually pretty clever.

The movie is awash in late nineties underground culture references, starting with the casting and philosophies of Boyd Rice who also does the impressive noise music score. But we also get references to Jim Goad's "Answer Me" zine as Rice wears a T-shirt that simply says "rape" on it, referencing the infamous Issue #4 of Answer Me aka The Rape issue that was banned. In case you don't get the reference Rice picks it up in a bookstore and comments on it. Morton Buggs book is called "Pure" a reference to Peter Sotos banned Zine of the same name that got him watched by the police and eventually arrested. With Bugg's somewhat modeled after Sotos it seems. The film itself fits securely within the "aesthetic terrorism" movement of the 1990's that spawned artists such as Marilyn Manson, Trevor Brown and many others.

The movie is a low budget affair with obvious limited resources. There is not a lot of camera movement making for a unfortunately static movie. The acting is also fairly dire in most cases. The only person rising to the occasion being Boyd Rice, while never being what you would call good, he is always compelling more because he is playing himself on screen. The director has a cameo as an investor in a bar that gets beat down and eventually killed. Lisa Hutchinson who plays the girlfriend is a great looking gal with a powerful set of 'lungs' but when ever she opens her mouth her acting nosedives several point. But she looks great in S+M fetish gear and that is probably why she was hired.

The movie is fairly hard to come by. It was released in a two disc set overseas at one point with the director's over feature films BLOODLUST but I believe that is long out of print now. Scour the used DVD places or grey market to try and find it.

Self reference is tired stuff 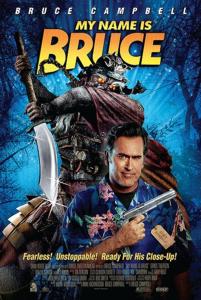 Once upon a time I could understand all the adulation that people heaped upon Bruce Campbell. Back in the day that seemed like a lifetime ago when he was just a working sclubb trying to make it happen while making B movies. Doing decent work in sometimes decent little movies and occasionally making those movies better. But then somewhere along the line the "cult of Bruce" developed. That vicious cycle where people begin to worship an actor just for being who they are and in turn the actor stops doing the interesting work and instead develops themselves as a commodity. Bruce Campbell stopped being a B-movie actor and started focusing on being the character of Bruce Campbell. What's funny is that he went from being a basically fun loving, gregarious guy that when you met him was decent and fun to interact with, to a caricature of himself who played up the "Hollywood actor" thing and started treating people lousy as part of his schtick. I met him once when he was in my home town to do a bit of outdoor theater and his was the sweetest nicest guy to me. He came back a year later to premier his shitfest directorial debut film THE MAN WITH THE SCREAMING BRAIN and was a dick and pretty much insulted the audience and the previous year's production. After that we started getting commercials with Bruce playing this Bruce character, and him writing a book from this point of view. It was only a matter of time before a movie would come along.

The Movie is MY NAME IS BRUCE and it is frankly a mess. In fact I wouldn't even had watched if a friend hadn't challenged me to. My Friend Bryan likes to do what he calls the "ANCHORMAN Challenge" where he makes us watch terrible comedies under the challenge that we will beak and actually laugh at some point, based obviously on the terrible movie ANCHORMAN. Well I made it through MY NAME IS BRUCE without laughing.

The story concerns a small redneck town in which a teenager while trying to impress some girl (and who happens to be the world's biggest Bruce Campbell fan) lets loose a Chinese demon from the local mines. Meanwhile Bruce Campbell, played by Bruce Campbell, is having a bad time with his career. He's a drunk, an obnoxious loser, his ex wife is banging his agent who will only get him the lousiest movies possible. He's a self absorbed idiot loser that we are supposed to think is such a schlub that he is lovable. But he is just annoying really. The kid ends up kidnapping him to fight the Chinese demon, but Bruce Thinks it is all part of some big play for a movie and doesn't realize it is real. Supposedly hilarity ensues. But you'll be groaning at the used and tired jokes you've seen before. Years ago, in movies from Peter Sellers and even he thought the sucked when he was doing them. There's an avalanche of EVIL DEAD and Sam Raimi references as if to remind you that Bruce was once in decent movies and to pacify the film geeks who would be the target audience. Oddly enough most of the jokes make fun of them too. The comedy consists of things like Ted Raimi in full Chinese make up talking with a bad accent, or Bruce with and angel and a devil both played by him arguing on his shoulders. Sad shit indeed.

The movie tries to keep it lighthearted, but the overwhelming sense of smugness keeps it from ever being very funny at all. I'm sure this whole thing is an act on Bruce Campbell's part but it is a slightly repellent one that I personally find a huge turnoff. The whole project stinks of what he thinks an audience wants from a Bruce Campbell movie, not what a good movie should be.

The only saving grace for me was the lead actress, who only shows up at the halfway point I might ad, Grace Thorsen. It's hard to say if she is a great actress or anything because the material is so weak. But my god is she hot! She has the best set of boobs I have seen in a movie in a long, long time. Though she never unleashes them, which for a project this lame, I can't say I blame her. But when she was onscreen I wasn't bored, stiff maybe, but not bored.