In the mid sixties hardcore hadn’t become legal yet, and even sexploitation could get you in trouble in some regions of the country. So to show naked breasts or sexual topics you had to couch them in other kinds of stories so you could argue before various censor boards or film commissions that the movies had "socially redeeming values". Out of this the “Roughies” were born. Hard bitten almost Film Noir movies that were basically sex movies built into crime films that usually revolved around things like prostitution or white slavery. Topics that made it so the filmmakers could easily top load the pictures with lots of gyrating naked babes, grinding and groping and heavy handed moralizing to satisfy the puritanical eyes of those above board.

Joseph P. Mawra was a master at this underground form. His OLGA films remained in film circulation well into the late 70’s even though they were shot in black and white, without sync sound, and had not a lick of hardcore sex, or even really any real simulated sex. What Mawra delivered was a seedy, dreamlike atmosphere that very little other films could match. A netherworld of busty criminal babes in black lace granny panties, stiletto heels and bad attitudes. Shot in arch black and white hues and wide angle lenses that made the already big breasts look even bigger. But his one two punch master stroke was adding a staggering level of S+M to the already heady mix and casting a model named Audrey Campbell as the lead role of OLGA the bitch Madame overlord.  These two elements are the very things that set this series of films apart from the rest and has made them favorites of sleaze mongers everywhere. 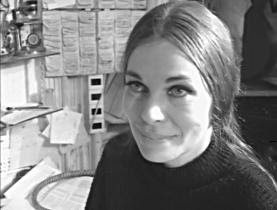 "Audrey Campbell is Olga!"
OLGA’S GIRLS is the second in the series and finds OLGA doing exactly what she does best. The film opens with her procuring a couple of new girls from Johnny Gordon aka The Pimp. The hilarious scene has the two girls prancing themselves to and fro as Olga and Gordon haggle a price. Gordon asks for $300 but she bargains him down to a “more reasonable offer” for both girls!

It is important to mention that there is no sync dialogue in the Olga films but the actors talk as if there is. Then a narrator literally tells us what is supposedly being said. A male narrator tells us most of the story, but Audrey Campbell actually narrates her own dialogue. This device creates some moments of surrealism as things will be unfolding on screen and the narration will only mildly match up. Also it is clear that the narration was not written until well after the movie was shot, maybe even until the day they were recording it, as many times they lines will contradict themselves, stumble over, and repeat what was just said. 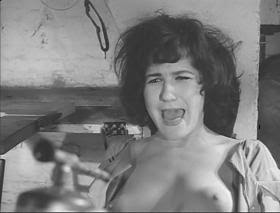 "The blow torch is put to rather reckless use for bra removal."
Turns out Olga is not only running prostitution but a lot of dangerous “hard drugs” such as heroin and marijuana(!) which she leaves to her girls to prepare. Often she will catch one of the girls sneaking a puff and have to drag them into the torture dungeon, where the movie really comes to life. The girls are put into chastity belts since “they will not be able to ply their trade and make money, and with no money not be able to buy drugs and get their fix!” Then whipped and tortured. Olga discovers there is a snitch among her girls and has to systematically torture all of them until she finds the one who is guilty. So we get a parade of topless girls being electrocuted, put in stocks, poked, prodded, whipped, the works.  Another girl under the stress of this “investigation” sneaks her first mainline shot of heroin and dies. Olga has the body dismembered and burned in the furnace so the Mafia bosses don’t discover it. Olga finds the girl ratting her out and has her tongue cut out. On screen. 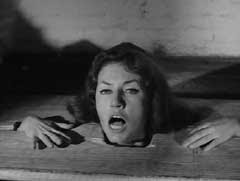 Eventually a couple of the other girls decide that if they work together they can over throw Olga. They manage to wrestle her down and get her into her own dungeon and torture her with a weird block of wood lined with nails. So she sets her sites on finding these girls and getting revenge.


Modern day sleaze fans may find the Olga movie’s to be too tame or easy for their tastes. But there is a mood, and a real sense of sickness to them that is hard to shake off. The feeling the Mawra was really into what he was presenting pervades the whole affair. None of it is really terribly dirty or offensive. But the way it is all so lovingly photographed and staged shows a hand behind the camera that clearly LOVES what he is showing. The shapely women, the bondage, the lingerie, the whole fetishistic nature of the beast. Clearly the man was at home. I can dig that. You should to. 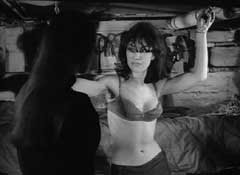 "Clash of the basement titans!"
Check out the TEMPLE OF SCHLOCK Blog for some original Ad Mat scans for some of the OLGA films!
Review © Andy Copp
Posted by Andy C at 3:17 AM