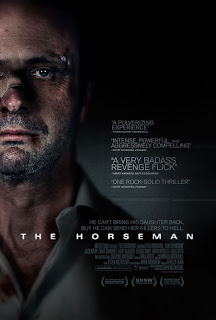 Incredible debut feature film from Australia has a few bits of implausibility, but more than makes up for any tiny shortcomings with strong performances, taut direction, and pounding tension. Idiot viewers are going to pounce on this and call it torture porn because their cinematic vocabulary doesn't extend beyond whatever catch phrase they have read on the latest gossip website. But what we really have here, is a solid, old-fashioned revenge thriller. The kind of film the British excelled at making in the 70's often with actors like Michael Caine or even here in the states with our homeboy Charles Bronson as he got a bit older. This is lean, mean, violent as all hell, and one of the most impressive indie films to roll out in many a moon.

Peter Marshall plays Christian, a middle aged man that in the first scene we meet him, is beating the living shit out of another man with a crowbar in some out of the way flat. It seems he is a termite exterminator, or at least used that ruse to get into this place to get this guy alone. He gets some minor information out of the guy: That he has several video tapes that Christian wants, and that he knows several other guys fucked his daughter. Apparently this is on those tapes. From the stacks of other tapes all over the joint it is clear he is some sort of pornographer. After breaking the man's legs Christian sprays him, and the whole place, down with gasoline and sets it ablaze with the guy still alive inside. He goes outside, strips down, cleans up and drives off as it burns.

On the face it is a simple set up, but it has a lot of subtleties that make it more complex. Christian takes to cutting himself the minute he watches the tape. At first not even understanding why he does it. Each time he finally gets to one of the people involved and has them at his mercy, often torturing them screaming for them to tell him more information, they all tell him the same thing; That she was there of her own free will. That no one made her shoot the movie, that no one forced her and that she was getting paid. He can never accept it of course and it goes from bad to worse every time. Naturally it was not as easy as that, but there is that fundamental truth that she was making the porn film of her own free will.

On the surface the movie is unfortunately more than a little anti-pornography, if you want to read it that way. But it seems to me that it is just a device to propel the story, more than a commentary on the industry itself. The characters are not exactly industry insiders, but a bunch of nasty criminal wanabees, and they could just as easily have been drug dealers, gamblers, dog fighters, or any other nefarious underground industry. As the film progresses any sort of commentary it might be making is left behind as the thriller aspects move to the forefront with more vigorous violence, beatings, murders and vengeance being the order of the day.

In fact as the film moves into the third act, it becomes much more of an aggressive exploitation revenge thriller, where as the first two thirds were a bit more of a cerebral, though no less violent, film. The last third moves the film to an isolated location with the REALLY bad guys, and lets loose with the extreme violence the movie had been keeping in its hip pocket up until then. Some audiences will probably tune out at this point as it gets pretty grim and unbearably violent. It also goes a bit too far over the top with Christian changing from an everyman type victim/hero to an unstoppable killing machine who is able to fight off a room full of guys with his bare hands. A few too many times credibility gets stretched just to keep it moving along. Never broken, but stretched.

But thankfully the velocity of the thing is so ferocious that these kinds of things are not there long enough to be focused on. I actually saw a commentary on IMDB where someone said the movie was too slow... I can't get my head around what they would consider a fast moving movie then as this thing moves along at a breakneck pace, never really letting you catch your breath. Maybe they were commenting on the small character moments, the very things that make the movie so powerful, such as a small subplot where Christian picks up a runaway hitchhiker who in some ways replaces his daughter on his journey. They have some heartfelt conversations along they way, that make what he is doing feel all the more bloodthirsty. Or maybe the moment when he finally brings himself to dump his daughter's ashes into a river, thus letting her memory go? Or maybe a tiny little moment like right before he snaps for the first time and he is talking to the distributor of the porn film, whom he has discovered was there during the shooting and he quietly asks him "did she smell good?" It is these small, quiet moments, which are actually pretty few, that make the rest of the movie "hurt" so much.

Far from perfect, but still really solid and impressive and well worth seeing. Recommended!

Tinto Brass will have make you HOWL 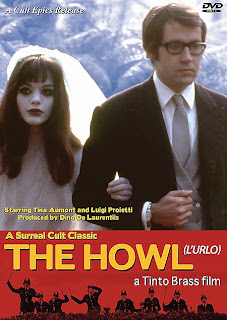 Most cult film fans know Tinto Brass either as the embittered director of CALIGULA (1978) or as the director of many an elegant softcore sex flick enamored with the female ass. His very early experimental, political assault films have been all but impossible to see up until very recently. Thanks to the fine folks at CULT EPICS we can finally have a look at these essential missing links in this passionate Italian filmmaker's filmography. But be forewarned THE HOWL (and the companion piece ATTRACTION - to be reviewed at another time-) are quite unlike his other films in any way shape or form.

From the very opening moments it is completely obvious we are not in the same playing field as the films we have come to expect from Mr. Brass, or any other movies from the Italian film industry of the late sixties in fact. There are some parallels to French agitprop cinema such as MR. FREEDOM and much of the American underground cinema that was flourishing at the time, but even at that, there is a distinct and assaultive flavor that rises from the first few frames of THE HOWL.

The movie begins with a young, beautiful woman named ANITA (Tina Aumont) quickly and desperately cleaning herself off in the shadows telling herself over and over "It's a trap. It's a trap" intercut with a young man explaining to the police that he is there to pick her up. Apparently she is some sort of young revolutionary who has been arrested and he is there to bail her out. Their scene is shot/edited in insanely fast cuts, and through horrendous distorting lenses that are often used for peepholes or looking glasses. Some shots shift from B/W to color. She explains to the young man who the police stripped her and "caressed her" with phallic objects while we are intercut with the flashback of the police strip searching her and raping her with a nightstick. This prompts the man to propose to the Anita. He squirrels through his datebook,riffling off days that are filled with work dates, and other bits of trivia until arriving at Sunday where there are a few hours they can actually marry.

They are at a makeshift alter in front of a delapitated building, Anita in Mime make up the wedding ceremony in progress. Anita becomes distracted, frightened and then runs away leaving her new husband to be at the Alter. She hops on a bus that is being pursued by a dozen or so police officers screaming for violence and blood. On the bus she meets a man named Coso (Gigi Prioetti) who explains to her how he is destruction incarnate, a killer, wiseman, saint sinner, etc. etc. He fucks her in the back of the bus then everyone on the bus goes crazy and destroys it before the bumbling police can. Together Anita and Coso will go on a journey into a phantasmagorical landscape of nightmares, political charges, sexual exploration, power struggles and emotional destruction. They will visit a brothel where every single sexual fetish and desire will be metted out from orgies, animal killing, to necrophilia to a family of self appointed saints who are actually cannibals.

The most nightmarish segment occurs in the mid section of the film when they come across a small section of town that is overrun by soldiers who are ruthlessly executing bystanders for no reason at all, while being following by a man dressed in a barrel and an American flag hat. The soldiers eventually corner Anita in an abandoned building while Coso is held up in conversation with a "left wing radical" talking about literally nothing. She is emerges from the building stripped and bloodied, clearly having been gang raped. During all the savagery of the preceding scenes is intercut with actual atrocity footage of WWII and the Korean War. .

After leaving this town they follow the broadcast rantings of a dictator to a military operation to find a literally wind up midget broadcasting the rantings of Stalin and Hitler with footage of the liberation of various prison camps being screened behind him. He falls and dies so Anita and Coso take up the broadcast, screaming for revolution instead.

After this point the movie sort of loses steam though with the duo sort of just wandering about from light hearted situation to situation none of which that have the emotional or visceral weight or impact of the earlier scenes. They dress as religion icons and steal a boat that they quickly crash. They get picked up and put on shore and end up in an insane asylum which they quickly ascend to leading, but Coso gets bored and they leave. They end up at a commune that resembles a hippie village with big boobed women wandered about free woshipping the sun and nature. etc. etc. etc.

Finally Anita finds herself being lured back to her wedding alter and Mime make up with her to be husband. Was this all a flight of fancy as she is about to be married? A commentary on the futility of love in the face of revolution and the breakdown of society?

What THE HOWL is, is about twenty five years before it's time as it predates the punk movement and MTV with the rapid fire editing, insane costumes and overt stylization that would become the norm in the age of rock videos. The films of Alexandro Jodorwosky and Derek Jarman would all come to use such material with a few years, and the French New Wave was toying with some of the ideas but not with the same viciousness that Tinto Brass shows here. The flirtation with near hardcore sexuality and pornography is also something that would not come into vogue until several years later.

While not always a successful film, THE HOWL is always a fascinating and original one. The CULT EPICS DVD looks as nice as a totally lost film can be expected too, with lots of film damage here and there and an occasional bit of washed out image. But the very experimental nature of the film itself kind of renders that kind of complaint almost moot as it seems to fit the fabric of the piece itself just fine. There is a commentary which I have not had a chance to listen to as of yet.