Real action for the Men of the house! 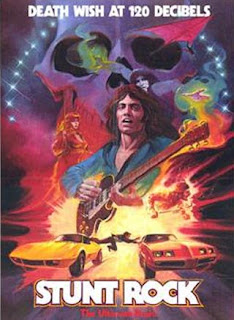 Day 18 of the September Exploitation challenge rocks us down under:
STUNT ROCK (1977)
D. Brian Trenchard Smith
CODE RED
2.35
This is a man’s film. A movie that real men can appreciate because it is about STUNTS and ROCK MUSIC. The ladies might like it because of the rock music (the wommins love the rock music) but admit it, us guys love to see dudes putting their lives at risk. Australian director Brian Trenchard Smith has the brilliant idea to have the countries  greatest stuntman Grant Page accompany him on this cinematic journy into mayhem.
The movie has no plot, just watch as Grant Page risks his life showing us how he makes his day to day living jumping off cliffs, smashing through car windows, shooting over canyons, getting set on fire etc. But wait! Grant’s nephew is in the American rock band SORCERY! What we now call Dragon Metal, Sorcery was a Zepplinesque L.A. rock outfit that went for the full on LORD OF THE RINGS stage show in which Merlin battles Satan with all kinds of pyrotechnics and an on stage onslaught of rock and roll savagery. So the film cuts back and forth between Grant doing his stunts, and Sorcery rocking the shit out of the world to great effect.

"Action at 100 Decibels per hour!"
There is a VERY slight story about a reporter doing a story on Grant while he is on the job doing stunts for a local TV show. A minor subplot has that show’s lead actress becoming friends with them, going to the Sorcery rock shows and parties and eventually getting to do a couple of dangerous stunts herself. But the meat of the movie is Page and Sorcery doing their colorful thing.

"Who let the old guy on stage? No wait it is Merlin from the band SORCERY!"
One really horrifying stunt has Page diving down a rope at free fall, which in and off itself is a pretty harrowing stunt, but he takes it to the edge by doing it with a full burn.  He calmly explains to us how the forty second delay he has worked out will keep the fire from burning throgh the ropes he is using keeping him from plummeting to the rock cliff below. But as you watch it in 400 frame per second slow motion it looks like he is going to burn alive and free fall to his death at any moment. Naturally he pulls it off without a hitch. But it is a sight to behold.

"All in a day's work for Grant Page. Or was it the Taco Bell he ate?"
Trenchard-Smith chooses to capture all of this is true seventies style with tons of split screens and super slow motion. The stunts seem like the are still in time they are so slow, so you get to see every piece of glass or lick of the flame, and the split screens feel like you are getting every angle, though sometimes it is just the same camera angle just flipped over. But it all makes for some visually dynamic stuff.

"Even the dog is a manly rocker in STUNT ROCK!"
In a lot of ways this is MTV several years before the was MTV. Or think of it as LED ZEPPLIN’S THE SONG REMAINS THE SAME without the fantasy sequences and replaced with lots of bone crunching stunt work.

"The babes of STUNT ROCK try out the Blue Man Group thing."
CODE RED’s DVD is extremely bad ass. A two disc set packed to the gills with interviews, commentarys, an older documentary Brian Trenchard Smith did called THE STUNT MEN, and tons of other CODE RED trailers. The 2.35 scope frame is the way the movie was always meant to be seen and after years of the badly cropped VHS this is a wonder to behold.
A note about CODE RED. Bill who runs that joint has announced publicly that in 2011 he plans to shut the doors. Thanks to a lot of internet bitching, and fan backlash, combined with really poor sales on amazing discs like this one, he is throwing in the towel. It is a complete fucking shame that a company that put their heart and soul into releasing great little gems is having to shut their doors and even worse because THE FANS didn’t support them. But when sales for a title are barely cracking 300 something is majorly wrong.  This disc is amazing, I’m glad I own it any self respecting cult movie fan should.
Review © Andy Copp
Posted by Andy C at 3:34 PM