Hey Wait where is Sly? 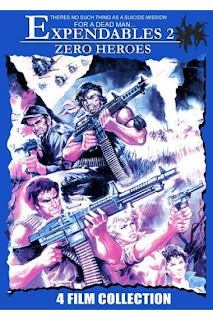 Nope this is not the Stallone testosterone multiplex action film in theaters right now (though I REALLY liked that movie) but in fact a really low budget Philippians lensed Grindhouse action war thriller director by the infamous Cirio H. Santiago in the late 80’s So Cirio got there first Stallone!

This is your basic Vietnam War drama about a rag tag group of elite forces made up of war criminals and thugs who are put together instead of facing life sentences. They are given to Captain Ressello (Anthoni Ferelli) who is the Army’s whipping boy. He is continually sent on the worst shit-hole missions in Vietnam because A) he gets the job done and B) his Sergeant hates him and doesn’t really give a rat’s ass if he comes back. So Ressello is given the challenge to mold this criminals into an elite fighting force who can do the jobs that the Army can’t or isn’t willing to do. The gang has the typical characters you would expect, the comedic stoner burn out, The white power racist, the cool black guy, the Christian etc. Naturally they do not get along at first but through several battles they learn to work together and gain each other’s trust and commitment.

A well worn, age old tale told here with workman like precision. The movie hits the ground running and every five to ten minutes there is a shootout or bar room brawl to keep it lively. The film is never as violent as it should be, but the action scenes are staged well enough to hold your attention and believe it or not, the acting is decent pretty much all the way around. The movie is shot in English so there is no bad over dubbing to distract from the performances. There is plenty of skin too, as Santiago finds creative ways to wedge in lots of naked Vietnam babes where ever he can. So at least the sleaze meter continues to ping now and again. Over all it is a perfectly serviceable and fun little time waster.

The print used in this Video Asia set is taken from a Japanese import VHS bootleg tape. How can I tell? Because the Japanese subtitles are still on the picture whenever someone talks! Never-mind the occasional tape roll and video noise! I bought this at Best Buy too! The store that rarely stocks new horror or cult releases from legit companies, but has very little issue carrying these knock off cheapo titles... Which I bought, so I have no room to judge.