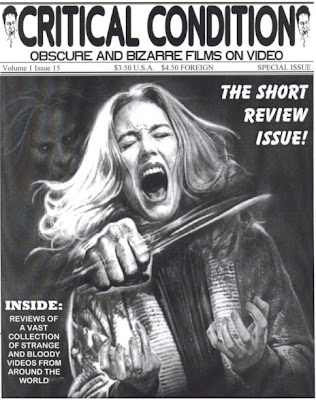 I logged onto Facebook today to startling news that unfortunately I had felt in my gut for a while now. Long time presence in the horror fandom community FRED ADELMAN had passed away from his long term fight with Leukemia. Fred had told me a few years ago in confidence he was suffering from the horrible disease.

I met Fred on the message boards of DVD Maniacs (Now AV Maniacs, which I unfortunately very seldom frequent like I used to)and his breadth of knowledge was apparent in any conversation. Perhaps every couple of days between that place and Facebook I have probably talked to him since capacity or another. He was an opinionated, surely son of a bitch. Make no mistake. If you crossed Adelman, he let you know right off the bat, and made sport in cutting down those who pissed him off. As he got progressively more sick, it became apparent that he was more and more angry as his time online became much more agitated. To put it mildly, he made a lot of enemies in the cyberworld in the last year or two through picking fights and never being afraid to stir the proverbial pot. But I never believed he was one out there doing it in malice, like so many people in fandom I have seen come and go. I think he was bored, sick and and always was highly opinionated about everything, especially things he cared about passionately.

But lets not let Fred be remembered for the crazy spats he had in the last years of his life, though many will. Let's look long and hard at the legacy in the genre he left. And it is a hefty one. Fred Adelman was one of the first feet on the ground ZINE publishers, though all too often he is not mentioned along side the early and important names like Jack Stevenson or Bill Landis. His zine CRITICAL CONDITION (CritCon for short) was started in 1982 and ran till 1985 was one of the first to really talk about movies we hold dear now. He was going to the New Jersey and New york theaters and seeing the sleaze and trash first run and writing about it immediately. Then he was there for the VHS boom right as it hit reviewing these movies as they came out. Which is when he started collecting his now insane and famous library of VHS (at one time listing at over 7500 titles alone). He went back into zine publishing again in the late 80s and into the 90's but stopped once it became apparent that the magazine publishing world was awash in rip off artists and hucksters that never paid. But this eventually let to Fred being once again among the first to open a website devoted to exploitation film and Critical Condition online was born. The website is so much more than just Fred's reviews, it is library and resource of the VHS era in one handily place online. There are thousands of reviews of movies that are talked about no where else. Scans of artwork and admats no one else have, and most importantly his long time pet project the history of VHS distribution companies told through there box cover scans.
Video Company VHS History

Which is probably one of the most in depth web articles online anywhere about the history of home video in any form. The horror fandom owes a great debt of gratitude to Fred Adelman for his knowledge and his website. The VHS collecting community that has sprung up in the last few years definitely own him because he practically built that community himself through his website and what it has spread through the years. He is one of those "behind the scenes" dudes who deserved some recognition for his place in the machine. Fred kept the site up to date weekly right up until the end of 2011 with new scans and reviews.

All the while continuing to auction off his rare collection on WENSY.COM to raise money for his medical bills. From what I gather he went into the hospital in very early January 2012 and passed away soon after (I do not have an exact date I am afraid).

The internet is a weird place. I never met Fred Adelman face to face. But I talked to him almost daily in one form or another. I considered him a friend. We traded movies often, and when he decided to sell his rare ad mat collection I scrambled to find the money to buy it, but couldn't do it (it went to a good home I was assured). I feel like I knew him, but at the same time feel like I never knew him enough. My facebook has been too quiet for the last month, and I will miss the conversations I am not going to have with him gone. 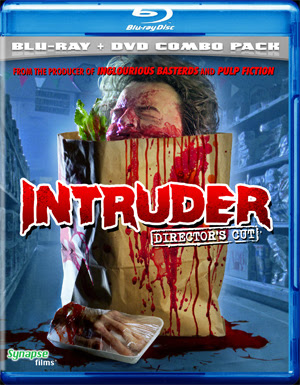 Like most every other horror fan my age I discovered INTRUDER by reading FANGORIA's much missed sister publication GOREZONE. They did a controversial cover story on the yet to be released slasher film that sported a really messy and disgusting still of the guy getting his face bisected by the band saw. I have fond memories of going to downtown Dayton on the bus to a book store called WIlkies, buying GOREZONE and reading on the way home. Much to the consternation of the other riders who I am sure did not enjoy such unpleasant cover stories such as that one. I wasn't driving yet, so this had to be around 1987 or so, a couple of years before the movie found distribution. But myself and lots of horror fans were excited by that article, stoked even. The article painted the picture of a slasher film that brought a European sensibility to the proceedings and turned the gore up past the breaking point. But when the movie finally surfaced, that is not what we got.


Instead we got a stylish, but intensely watered down movie that was missing all the gore footage. An R rated slasher film that really satisfied no one involved. The fans were appalled and the filmmakers themselves felt like they were boned. For years the movie was impossible to see unless you went to the bootleg market. There were copies from Japanese imports that were the most complete but looked terrible. Eventually Charles Band put out a lackluster, full frame DVD that at least put a uncut DVD on the market, even if it looked terrible.


So it is like a gift to all horror fanatics who have waited since the late 80's that Synapse have taken the time to properly care for this movie and put out a definative edition that not only restores it to the full uncut edition but have gone back to the original elements to present it in the best possible quality. This is the best this movie will ever look, and it looks gorgeous. Granted it was never a "pretty" movie to begin with, but it finally looks like it was intented, in the proper ratio, with all the colors accurately toned and graded.


For those few not in the know the movie revolves around a crew of young folks working the late shift at a grocery store. One of the young ladies has a psychotic ex-boyfriend who is causing her problems which sets the stage for a tense showdown early on in the movie, so when people start being stalked and killed all fingers point to him. And people aren't just getting slashed, they are getting whacked in the most gory and brutal ways, using the tools of the store, such as the meat cutting machines, hooks and other impliments. The story is amazingly slight, but director Scott Speigel who cut his teeth working with Sam Raimi milks it for the most by ramming his camera into places that no one else would ever think to put it, like inside grocery cars, or inside phones. He cribs lots of his style from the Italian horror masters but makes it work for him, twisting mood where other movies of this ilk generally wouldn't bother. He also has a rather likable cast, especially with his leading ladies Renee Estevez and Elizabeth Cox (who we learn on the disc was dating first time producer Lawrence Bender!) The Detroit crew of Sam Raimi, Ted Raimi and Bruce Campbell all make apparences too.


But the real stars of the movie are the effects by the newly formed KNB effects team. This was their first film out the gate and even though they had next to no money to spend their really shine. Which made the editing of their work all these years a real crying shame. Which is yet another reason this disc is such a welcome addition to any horror fan's collection as you can finally see these guys innaugral work in all its blood splashing glory. That band saw bisection STILL is one of the most savage, hard to watch kill scenes in any slasher movie, ever.


The extras on the disc are very enlighting to the plight the film went through to not only get made, but that long, hard road to finally be seen uncut. There is a spunky and fun commentary. Speigel has particiapted in lots of commentaries of other films and he is always a delight to listen to, so it is extra fun to get to hear him finally talk about this project that is so close to his heart. He is paired with producer Lawrence Bender who has gone on to produce some of the most profitbale indie films of all time with Quintin Tarantino so his perspective on doing this ultra low budget indie horror is unique and very insightful. The Behind the scenes featurette covers some of the same territory, but has a whole bunch of the other key players involved. So everyone has their say, making for a well rounded and very interesting look at how it all went down. Most interesting to me is how Charles Band ended up with the film and was forced to hand it over to Paramount leaving it to be cut to the R rated. That is the information I think a lot of horror fans will want to know as well. There is a short with bits from the workprint that believe it or not has MORE gore, and also bits and pieces from what has survived from the initial super 8 film that was shown to investors to raise money for the project. One of my favorites a very short bit that has the director of the movie A BETTER PLACE remembering how his angry letter to FANGORA detailing how the movie was cut was printed ended up netting him an uncut tape of the film sent from Scott Speilgel himself! A nice extra for those of us who remember reading that angry letter all those years ago!


So if you even consider yourself a marginal slasher movie fan, or 80's splatter fan you need this set. No excuses, this is the movie that is missing from your shelf. Get it now.