Not too much at the Top Of The Heap 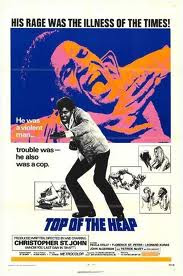 
This rather obscure blaxploitation has a few fans because of the delirious fantasy sequences peppered throughout such as our hero running through the jungle naked, smashing watermelons, or helping to fake the moon landing, or recreating the JFK assassination (which I am sure was NOT too cool in 1972!). All scenes that are just weird enough to be humorous and kitchy. But what most reviews don't reveal is just how damn depressing this movie is. What material I have found on it centers on the bizarre stuff, the overblown goofy things. But they seem to have missed the last half hour of the movie where it becomes a rather grinding tale of one man’s life spinning out of control because of his own self loathing and inability to come to terms with his own racial identity. While I wouldn’t call it a “good movie” it certainly is not a brainless one, and by the end really delivers a melancholy one-two punch to the heart.


Christopher St. John (who most remember from being in SHAFT) wrote, produced, directed and starred in this nightmarish tale of an inner-city beat cop who is on the edge of a nervous break down. We meet him literally as he is having an argument with his wife who wants him to have a heart to heart with his fourteen year old daughter because she has been caught getting busy with a neighborhood boy. He doesn’t want to have the talk, and really isn’t all that concerned about her burgeoning sexuality either “She’s just trying to figure out what’s happening between her legs!” he tells his wife. At work he has been passed over for a promotion by a white cop and the reason is obvious. Though his pissy, angry attitude probably played into it as well. He is fond of telling his partner (and lots of other people as the movie carries on) that he is the law he can “do any Goddamn thing I want to”.

When he busts two black guys with some dope they hit him where it hurts. His racial pride. They want him to let them go, but he doesn’t so they begin to call him a nigger and an uncle tom. Claiming he is ineffectual as a Black Man because he is a cop. He sees that he gets very little respect from his own race on the streets. They look down on him for being “the man”, yet anytime he gets into a tense situation on the streets he gets racially abused by anyone who ISN’T black until they realize he is a cop. Then they backtrack out of whatever they were saying.


He spends his days fantasizing about being an Astronaut and other big goals. He has a very active inner life. We also find out from other characters that his mother has died, something he never wants to talk about. yet it seems to be weighing heavily on him. At one point he tells his wife about going to the funeral “I don’t want to go and hear all that singing and praying to tell God thank you for all this fucking pain.”


His only true friend is his former Captain who is now in a old folks home. He visits him and sneaks him in a bottle of hooch they proceed to get hammered on. The old man tells him of the horrors of getting old about “you get smaller and smaller until you are too goddamn small for your own body anymore. You get older and get to sick to even live like a human being anymore.” The old man gives him a loaded pistol as a present that he has kept hidden away from the orderlies. Which is good because he has discovered earlier when arresting a knife wielding madman that somehow his own gun had no bullets in it.


He tries to reach out to the women in his life for connection, but there isn’t any. His wife is tired of his anger and distance. His mistress is young and wants to live a fulfilling life which he cannot give, and his daughter his clearly using sec and drugs to escape. He blames being a cop for his lack of respect. He blames being black for his lack of respect. Both play their parts, but it is his insolent and unresolved anger that is the biggest motivating problem. His fantasies clearly show he would rather be someone else, doing something else. That he would rather be changing the world, not cleaning up after it. The last half hour is a series of poor decision making for him that clearly are leading him down a path of his own choosing with a brick wall as a dead end.


The film’s biggest drawback is Christopher St. John himself. the lead character is such an angry, loveless prick that it is hard to like him, or muster up much care for a character that is so bitter and touchy. His plight is worthy, and intriguing. But he garners so little sympathy that the film has a hard time making you feel for him. The fantasy sequences are a little too much too. A few work fine, but for the most part the feel like the left overs from a different movie. Though the JFK finale is strikingly appropriate.


Overall TOP OF THE HEAP is such a bizarre relic of the era that I couldn’t help but appreciate it. But it also was a pretty big downer. Obviously it was supposed to be and did it’s job.
Review © Andy Copp
Posted by Andy C at 1:43 AM