Just how Horrific are those sexual horrors? 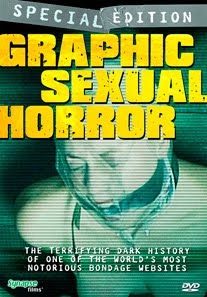 It would be a misnomer if this documentary on the infamous bondage website Insex.com was anything other than intensely graphic, The film certainly delivers on a visceral, gut level, showing sights and images that very few have probably EVER seen before. The subject matter is undeniably fascinating, shocking, at times repellent and other times horrifically beautiful. But it just never feels like it goes deep enough.


The movie centers mostly around Insex created BD aka Brent Scott and his lifelong fascination with bondage and forced orgasm. He recalls his first “imprinting” as a child with the material as he was tied up by his female cousins playing Wonder Woman and had an orgasm against his will. We are shown his early disturbing super 8 short films that alerted the law and his utterly amazing photo-realistic oil paintings. Work he simply says he wasn’t able to enter the art world with, but doesn’t really elaborate on about why. Considering the incredible nature of the work I would love to know more about why that was.

Soon in the mid 90’s he found himself exploring S+M in his private life and it sprang into the website where all his indulgences collided. The work he was producing was far beyond any of the normal S+M fetish world as he was drawing on his own dark fantasy life, artistic bent, and inspiration from serial killers. His user base exploded and he began to employ many willing models, a full time metal-smith to create the most complex and outrageous bondage and dungeon gear imaginable and in-house video crews. Soon models were seeking out Insex to work with them, some as a right of passage, knowing that “surviving” an insex live show meant they could take anything else the porn world could throw at them.


A typical Insex live show consisted of anywhere from three to six hours live on the net with users chatting in to tell the models and what they wanted to happen next. Often a theme was the order of the day such as electroshock, or Hydrophobia.  The models would be put through their paces, being tied up, whipped, caned, gagged, almost drowned, etc ending the show with a forced orgasm, and a post session interview. BD called this interview the “money shot” as the models were often in a daze from endorphin highs.

The documentary covers a lot of this territory, showing large snippets of the shows, the preparations, talking to the models and the various people who have worked with Insex over the years. One topic that comes up that is interesting is the one of consent. With the dynamic being that the loss of control and direct denying of consent being a large part of that, consent becomes a murky part of the whole power play. So “safewords” and “hard limits” become the issues of the day. The girls are instructed to simply say “uh uh” if things get too heated or out of their control zone. We see a session where a girl has told BD one of her hard limits it being slapped in the face but he has either clearly forgotten it, or ignored it and because a user online asks for it, he slaps the girl anyway and she has a meltdown. We watch this whole thing play out as she freaks out, he accuses her of not playing along and trying to wrestle control away etc. But neither of them will ever admit that they have made a mistake and are in over their heads and terminate the session because such a huge amount of commerce is involved. Another spot shows a girl being dunked in a water tank repeatedly She clearly says her safe word, but it is simply ignored and the session continues as if she never said it. Interestingly enough, the documentary never acknowledges it either.

Several people accuse BD of not being straight with the girls as the site got closer to the end, and even BD admits he started to take advantage asking girls to “play” outside the contents of shoots. Even taking several on as “residents” aka live in sexual partners. But not nearly enough time is spent with this subject. Eventually the government steps in and uses the newly minted PATRIOT ACT to force the bank to revoke the use of the credit cards with the site thus shutting down the site.

One of the extras on this disc is a short interview with director Barbara Bell where she mentions that she had worked with BD previous to making this movie. She clearly has a little too much interest in the subject to be objective enough. The movie is always interesting, but when it comes time to dig deeper, she simply doesn’t. A great example being the safe word controversy and the girl who got slapped. Bell openly admits in the interview that neither she or her co-director even thought to interview that girl when all was said and done. Then offers some cockamamie  socialization theory about how the scene represents the power dynamic in all work place relationships and how that is the real reason people respond to it. Well, that may be what SHE sees in it. But most people are actually more interested in what that girl was thinking, and if Bell hadn’t been friends with her subject before hand, she would have thought to go ask her what happened and her reactions to it. Even when BD seems willing to delve further, she seems to be wanting to back off. The film remains engrossing, and fascinating, but it needed to be a good half hour longer and ask harder questions.

This is here the film falters is that for all the in depth access the film crew obviously has, at the end of the day, I was left feeling like I was not being given the whole story. That what was presented was only skin deep, even if the skin is covered in welts and bruises.  But for those who have never heard of Insex, or are new to this world, there is MUCH to recommend, no matter how Graphic the Sexual Horrors on display are.