No actual Hitchiking going on.

A Month of Exploitation Film
I am going to attempt to do the old 30 films in 30 days thing again. This time 30 Exploitation films in the month of September. I'm getting a jump early with tonight's movie. 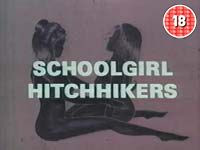 SCHOOLGIRL HITCHHIKERS (1972)
D. Jean Rollin
Grindhouse Experience Box Set Vol. 1
Pan and Scan
This light weight nudie, S+M yarn has very little substance to it. Just some pretty girls caught in a villa with some bad guys and a over a abundance of skin on display. The film looks to have been shot on less than a shoe string with all the action taking place inside the mansion or on the grounds with very minimal set ups or camera moves. Everything is kept very light and fun, with no real sense of danger or menace throughout the proceedings, with just a tiny hint of S+M to pepper to edges.

The story starts with two teenage girls camping in the woods named Monica and Jackie. Jackie has the worst wig in cinematic history. They discover this big empty mansion and decide to crash there for the night. We quickly learn their friendship has extended to a bit more as we watch them bed down for the night in each others arms. But soon Monica is up and around and discovers that there is a low rent gangster spending the night there as well, named Fred. Fred is a dead ringer for Tom Savini, if Savini was five foot one and had a handle bar mustache. For reasons beyond my comprehension Monica beds down Midget Savini and Jackie joins the fun too. 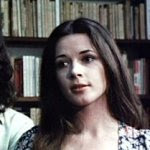 "Monica contemplates the ramifications of sexing up Midget Savini,"
The next morning the girls are on their way and Midget Savini’s boss, a curvasious, jack booted and slightly cross-eyed babe shows up wanting her package of jewels. Seems that they are missing so they find the girls thinking they must have stolen them. Soon they are stripping down poor Jackie and tormenting her with fire place tongs and cutting her horrendous hairdo. She looks about ten times better. Monica seduces a henchman and gets away to enlist the help of a dimwit Private eye and his cartoon outfit wearing side kick to try and get her girlfriend back. A craptastic shoot out ensues as well as a topless cat-fight. Lots of cat and mousing about who has the gun, and Midget Savini beds down the rest of the female cast (except his boss who watches and gets turned on) until Jean Rollin himself shows up to answer all the questions. 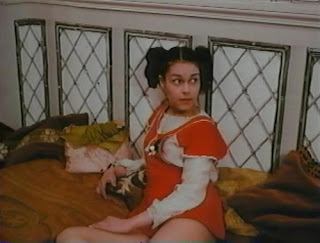 "The Private Eye's side kick cannot wait to get out of this silly outfit."
I honestly didn’t even notice who directed this during the opening credits, and they looked to be pseudonyms anyway. But about two thirds of the way through I found myself thinking this felt an awful lot like a Rollin movie. With the two teen female leads, the action taking place in an isolate villa, the lone sexual S+M torture scene, the softcore lesbian sex... Even some of the shots and set ups felt familiar. Then suddenly the man himself comes walking into the movie and I was like well that seems to settle that! After checking around online (the IMDB lists this in their adult database though it really is just barely a softcore movie) my suspicions were confirmed. 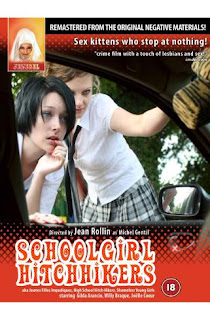 "Quite possibly the most misleading DVD cover art ever. There is no hitchhiking in the movie, and certainly no girls who look like this!
Without a doubt this is lower tier Rollin, even among his sex films. But at the end of the day it is diverting enough, the girls are pretty and have natural breasts, the dubbing is silly and it is all in all just a wisp of a thing that is nice enough to take your mind off of reality for a while. The print in the Grindhouse Experience Box Set actually looks better than the rest of the movies in that set. Which means it looks like crap, is cut, missing frames, scratched, etc. But still has strong color and is surprisingly watchable and has a stronger bit rate than the others in the set, so it doesn’t break up every few minutes while playing.

Since I cannot find a clip of Schoolgirl Hitchhikers, here is a clip from Rollin's Masterpiece FASCINATION.