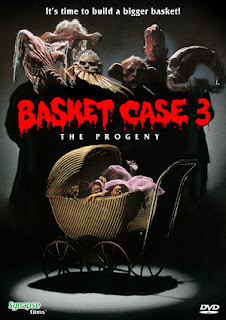 Many people do not care for the last of the BASKET CASE trilogy. It is easy to see why with its odd shifts in tone, totally over the top cartoon like antics and a story that barely makes sense at best. I hated it when it came out in 1992. But for me the years have been kind to the movie and I am not nearly as hard on it as I once was. Calling it a good movie would be a lie. But calling it entertaining? That is about on track. 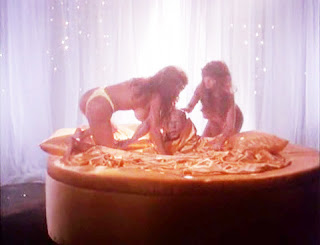 The movie picks up shortly after the berserk ending of the second film. Dwayne has accidentally killed his girl Annie when he panicked at her mutation/offspring. He had attempted to sew Belial back onto his side to be back together with his brother. Belial has knocked up his equally monstrous girlfriend in the dumbest sex scene in movie history. So Part 3 starts with trying to wrap up all these messy plot threads. Everyone is still living with Granny Ruth and her menagerie of mutants. They discover they have to take Belial's monstrously pregnant girlfriend down south to a special Dr. friend who can facilitate the birth of what turns out to be a dozen or so Belial critters. 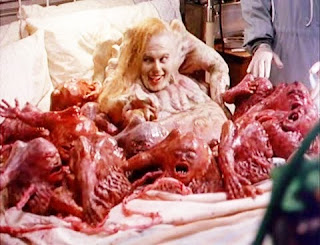 Once in the south it becomes WALKING TALL meets the monsters with the occasional Jess Franco homage thrown in. The local Sheriff and his sexbomb daughter get involved jailing the freaks and trying to keep the Belial babies. So it is up to the gang to break them out and get revenge. Once Belial's offspring show up in a souped up metal contraption it gets serious. 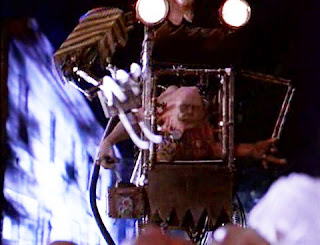 Basically this is like a Tex Avery cartoon with the monsters from the other films. Henenlotter has said that he basically doesn't like the movie much and only did it to fulfill a contract. But there is a certain off beat charm to it. I would say it works best as stoner cinema. Those who are very medicated will get the most out of it.

The DVD is bare bones. But the transfer looks freaking gorgeous. 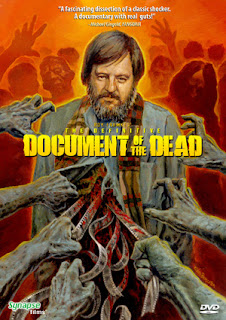 I'm quite a big fan of director Roy Frumkes DOCUMENT OF THE DEAD. It is one of those documentaries that I watched frequently while I was in film school. I found watching George Romero create to be both comforting and inspirational. I missed Synapse earlier release of the movie when DVD's first hit the market, but I did get it in the DAWN OF THE DEAD five disc box set. So I was anxious to see what was new about it for this latest release. What exactly made it "definitive".

I'm afraid to say there is a LOT new about the film, and pretty much none of it good. It seems that Roy Frumkes has felt the need to update and tinker with the movie as years go by. Even the VHS edition I used to watch in film school was a different edit than the one he initially created. That edition has some behind the scenes footage of TWO EVIL EYES spliced in at the end. I guess the DVD edition was different too. But this time has has done a total facelift to the movie that feels more like corrective surgery gone horrible wrong. Something like a half hour of the original on the set of DAWN OF THE DEAD footage has been removed and replaced with stuff that would barely pass muster as extras on a DVD. There is a whole stop motion animated cartoon of Romero fighting off zombies that opens the movie now. Then the meat of it is the same with the DAWN OF THE DEAD stuff. Then it veers horrible wrong with a very long set of "interviews" from people who worked with George over the years. The problem is, this footage isn't interviews, it is some hotel party at a horror convention and Frumkes sticking his palm-corder into various people's faces to get sound bites. It feels like some horror convention version of those awful TMZ shows.Or worse extras on a Troma DVD.  Then we get an excruciatingly long behind the scenes clip from SURVIVAL OF THE DEAD in which Frumkes acts as a zombie and screws up take after take. These two bits take up a majority of the new running time. Replacing former footage that was much more interesting.

I feel like shit slagging on this because everyone involved from Synapse to Frumkes himself. But this is just a painful missed opportunity.The DVD I reviewed had a commentary from Roy that is in some ways better than the final cut of the film. He explains why he removed things (generally he just liked the new stuff) and talks about being on the set of DAWN.

I have not viewed the BLU RAY so I do not know if there is anything different from the DVD release.

Here is a promotional video for DOCUMENT OF THE DEAD from Japan. This is NOT on any releases I know of.
Posted by Andy C at 2:29 PM No comments: 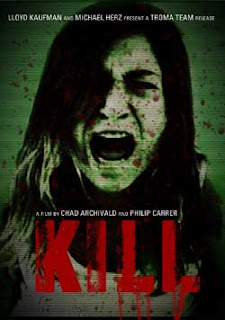 This little indie production picked up by Troma turned out to be a surprise. For the first forty or so minutes it truly sucks, then something strange happens. Against all odds it begins to actually work and is very enjoyable for the next 35 to 40 minutes. Then the ending sucks again. But with all that said it is worth a curiosity viewing. It might even work better if watched with a group of rowdy horror fans.

The story revolves around a small group of people all of whom wake up mysteriously in someone's apartment. It is supposed to be something more nefarious, but it is clearly just someone's apartment. Still a very David Lynch set up as these strangers realize they are trapped and try to figure out why. Seems all of them pulled some wrong shit in the recent past and this is some sort of punishment. The first half of the movie is taken up with the bickering and accusations among the group and not a one of them is interesting, likable or even a capable actor. Then another element is introduced to the film, the apartment/house has these demonic figures roaming around dressed in savage, Zulu-esque attire complete with huge freaky home-made masks. Suddenly and without warning the movie becomes a fairly effective stalker picture with some splashy gore. These figures are imposing and even a little frightening. I can recommend this part of the movie.

Then the ending reveals what is going on and momentarily it becomes THE TRUMAN SHOW for the indie no budget horror crowd. All I can say about that is that it beat CABIN IN THE WOODS to the punch by a couple of years (or did it considering CABIN sat on a shelf for a couple of years?).

This is the typical TROMA DVD with a useless and annoying intro by Lloyd Kaufman, who is now just poorly dubbing over old  intros putting it off as a joke and not that they company has become that low rent.

It is a middling affair but worth a cursory look. 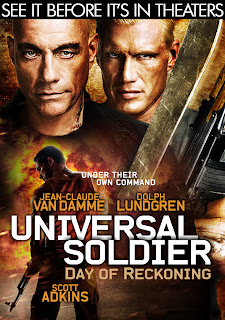 This was a huge surprise. We popped this on expecting some silly action thrills, nothing too heady or taxing. What we got was an action movie by way of Gasper Noe. Everything in this production is bigger, bolder, more wild and deeply dark. The opening scene sucker punches you and it rarely lets up from there.

Martial artist Scott Atkins is the actual lead this time around, playing a special forces soldier. He has a great family and loves his job. That is until Luc Deveraux (Jean-Claude Van Damme playing the villain here) storms his house, murders his family and leaves him for dead. When our hero gets out of the hospital some months later he goes after the paramilitary group that killed his family.

The story is actually a great deal more complex than that. But where the movie excels is in the direction and cinematography department. Which should come as no surprise since director John Hyams is the son of Peter Hyams (who in fact directed Van Damme in TIMECOP). The camera prowls and climbs, often sitting right behind character's heads just like in ENTER THE VOID. Nothing is ever covered from an expected vantage point. But when it comes time for the fight scenes the movie really shines. None of that Hollywood seven million cuts in one scene business. These are covered well but with minimal editing so you can get the feel and impact of the violence. Another trick Hyams uses is to use "ramp motion" where the footage starts at normal speed, slows way down, then speeds up when someone makes contact, then back to normal speed. He also does the old MONTY PYTHON trick of cutting out a frame or two upon the impact of a punch. It makes it look like it landed, very hard. 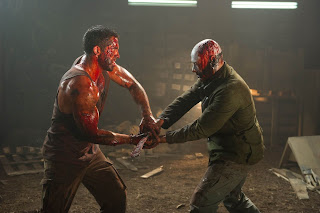 The movie is also hyper violent. So violent in fact that the movie had to be re-edited to get an R rating. This hasn't happened for a while since the MPAA loosens their grip a little bit. So that actually shows you how brutal this is.

Dolph Lungren is back in a couple of scenes still playing a super soldier, and Van Damme is just tearing up the screen as the bad guy. If you had told me even ten years ago Van Damme would make good on his career AND deliver good performances, I would ha said you were crazy. But here its (see his other recent film 6 BULLETS for more of Van Damme carrying his weight). Scott Atdkins is surprisingly decent as a leading man too.

Basically if you are an action fan of any sort it is criminal to miss this movie. 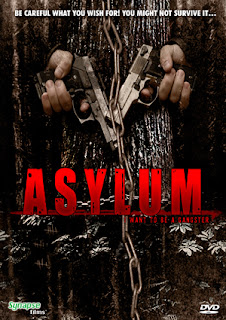 ASYLUM aka I WANT TO BE A GANGSTER (2008)
D. Olivier Chateau
Synapse Films
S.O.V.

This very strange, not quite black and white Gangster film from France tries very hard to be something different. Unfortunately the uneven tone that results kind of sinks the endeavor.

Julien Courbey plays Jack, a low level street thug who really lacks the common sense of a second grader. We meet him pulling a Russian Roulette grift. What he doesn't get is that he is pulling this fast one on some gangsters and they are non too happy about it. He ends up working for the mobsters as an entry level courier. But he screws that up too when he is trying to teach his new wet behind the ears partner to shoot and he blows his brains out. So Jack is sent out to a lonesome field and chained to a tree to die. The meat of the movie is Jack chained to the tree and the various silly things that happen to him. The last ten minutes try to bring a little bit of seriousness to the proceedings. 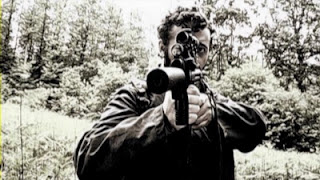 ASYLUM's (not sure why it is called that, especially when there are a half dozen other films with that name) biggest problem is that the director never sets a mood or tone. So instead the movie feels like disconnected skits with no through line of character or theme. It also can't make up it's mind if it is a comedy or gritty gangster picture and ends up neither.

The movie is clearly shot on video and post effected to have a drained sepia tone. Some occasional color bleeds through but it generally tries to look like some movie from the 20's. There are a making of and another comedic short film called HOMER also included on the disc. The presentation here is remarkably good. Especially considering the film cost $4000 to make.

I hate to give bad reviews but I felt like this one missed the mark.