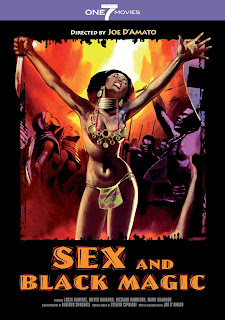 Richard Harrison stars as a writer in a far off island who becomes estranged from his lopsided breast implanted wife (Nieves Navarro). She begins to bang the nubile island hottie (Lucia Ramirez) to fulfill her sexual needs. Lots of picturesque lounging on the beach. Well photographed white sands and sixty nine positions while splayed out with waves crashing into them. Soon The wife is doing more than plowing the public fields, she is teaching the house guest the English language and generally taking her into her lie and heart. When Hubby gets home he is at first oblivious to their transgressions, but it wont take long for him to smell the musky scent of lady lust and put his own manly spin on the situation.

Richard Harrison speaks about shooting this movie in the book GODS IN SPANDEX and what he says is not exactly kind. He claims the script he was given to shoot was a thriller without sex and the movie he was actively shooting was quickly becoming the quasi-porn film we have today. Little did he know that some versions had hardcore spliced in as well (scenes which are extras on this DVD). He also tells stories of crew members teenaged daughters that continuously tried to have sex with him and how he had to fend off their advances... But if he was so in the dark about the content of the film then what about the shots of him almost balls out naked?

"Wading in the waters of island love. Joe D'Amato style."
The movie is typical of D’Amato in that is is generally boring sex fodder bookended by wacky almost horror. Opening with a cannibal tribal ritual in which a man has been killed by a shark and the tribe shares eating his heart for some reason that is not entirely clear. This makes not much sense until the last few minutes when it rears its head again to bring the movie back together. Naturally being the era it is from it also contains the typical lesbian gets raped by the lead of the movie scene. But here done one better when the female lead who has just been bitch slapped away so he can rape her lover decides this is just too good a chance for some hot three way action and joins in. Naturally this repairs their broken marriage and the poor Island girl is just going to have to go back to her savage ways!

Still with all the sleazy sex and offensive non-pc goings on, the movie has one nearly constant thing going for it. It is unrepentantly boring. It looks nice, D’Amato was always a talented cinematographer. But his movies were always paced like doughnuts packed into a colon. they often just refuse to move.  This is no different.

This new dvd has some cut scenes, those mentioned hardcore shots and a different end credit sequence. The transfer is nothing to write home about but it is at least in Italian.
Review by Andy Copp
Posted by Andy C at 11:09 PM No comments: