MORE BRAINS: A Return to The Living Dead Documentary 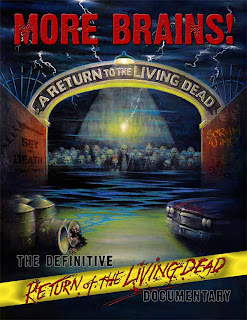 From the creative team behind the award winning four hour documentary NEVER SLEEP AGAIN on the NIGHTMARE ON ELM ST. series comes this in depth exploration of THE RETURN OF THE LIVING DEAD. But unlike that film this is only a look at the first film in the series. At least as far as the first movie itself is concerned. Once you get into the extras they delve into the first two sequels at length (and for my money get a little more interesting, but more on that in a moment).

So all the expected criminal minds are present from producer Tom Fox from the original screenwriter John Russo, the entire cast and lots of crew people to even Suzi Q to talk about her musical contribution. In fact the only missing contributor is obviously Dan O'Bannon because he had recently passed away (but there is a lengthy interview with him as a DVD extra) and oddly enough Tobe Hooper who had originally signed on as director by left the project before shooting began and then Dan O'Bannon signed on and totally recreated it from the ground up. Apparently there is some animosity there.

For me there wasn't a ton of new information, but then again, I have followed the film for years, through the various video and dvd incarnations AND read and re-read the CINEMAFANTASTIC article that went into major depth about the troubled production back when the movie was released. But for fans who haven't spent years reading about the film there is a lot of news here. Stuff I found of interest was finally getting to hear the controversy about the effects work from the mouths of those involved and seeing actual pictures of F/X man Bill Munns' aborted work. I couldn't believe how truly awful it was, for years I read about his dismissal from the film, but couldn't believe it could be as bad as the people involved claimed. He is interviewed here and admits it is not his best work, but the pictures tell the story and it is, well, embarrassing. I give the man props for being willing to take part in this documentary and own up to what went down.

The actors have a lot of fun stories, but oddly enough not very many people have a lot of nice things to say about Jewell Shepard, and she herself comes off pretty jaded about the production. There is also some pretty insane stories about Glu Gulager not getting along with Dan O'Bannon including him going after him with a ball bat and a big metal can. 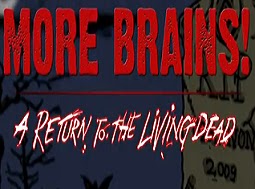 Not shockingly John Russo down plays the successful nature of the film in his interviews where it is clear he just doesn't get it, the humor or what they were trying to do with the movie. The mind boggles at what kind of immense piece of crap this would have ended up as if he and his buddy's would have stayed at the helm. He talks at length about how he would have opened the movie, which ended up in his raping and pillaging of the 30 Anniversary of NIGHT OF THE LIVING DEAD.

The extras include fairly in depth explorations of Part 2 and Part 3. Part 2 sounds like an abortion from the get go, from the fact that director Ken Weiderhorn who was hired because he had done a few other horror films, said on set he didn't like making horror. Though that entry had probably the best actual effects of the three it is the most uneven tone wise. It is basically a kids film, the comedy is all over the place and it seems the the set was miserable at best. The actors all talk about how they did not have a good experience being there. They also all talk about how terrible the script was.

Part 3 has a lot nicer things to be said as everyone seems to have had a much more pleasant time on that set and agree it is more unique film. Though the film was basically green lit from a farming out of ideas until they found one that stuck. Everyone involved agreed that an undead love story was a fantastic approach that took the series into a new direction.

The interview with Dan O'Bannon is bittersweet at best now that he isn't with us. But his enthusiasm is infectious and his final walk off line about loving all his fans is quite beautiful. It is a sentiment that everyone should remember about being famous.

If you are a fan of this series there is no reason you shouldn't pick this up.