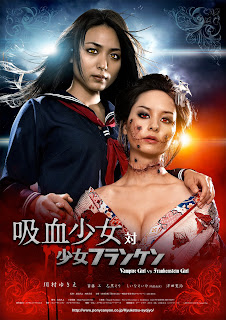 From the directors and F/X teams behind the 2008 hit TOKYO GORE POLICE comes this outrageous gore, monster, comedy that, frankly, I don't even know how to begin to review. Is it a good movie? No, not really, but it IS a constantly inventive one. Watching VAMPIRE GIRL VS. FRANKENSTEIN GIRL you are sure to see things you have NEVER seen before, and a few things you probably never will want to see again. Every frame of this movie is jammed packed with color, movement, texture and lots and lots of spraying gore. If ever there was a movie that was practically begging you to pay attention it is this one. It is NEVER boring, every second pops something new for you to lock your eyeballs onto. But Jesus, at some point it almost becomes sensory overload. 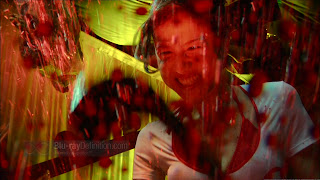 The movie opens with a crazy, crazy scene of our lead Vampire Girl (Yukie Kawamura) facing off with a trio of doll faced school girl monsters. She dispatches them them gorily, stripping their skin off in long spirals and popping their skulls out, stacking them on the beach before her boyfriend Jyugon Mizushima (Takumi Saitô) begins to narrate the tale ahead of how they met. Jyugon is the only real available boy in school and he is cornered by Keiko (Eri Otoguro) the pushy hot girl in class and soon he is her boyfriend. But the new transfer student Monami sets her eyes on him and gives him a chocolate candy with her own blood in it. Before he knows it he is craving blood and wanting to be with Monami the Vampire Girl. What none of them know is that the hot school nurse and school assistant principal are doing experiments in the basement. The two girls are out to fight each other over their new boy toy until he becomes a vampire too and Mizushima ends up with her head blasted open on the pavement. Soon she has become the experiment of the school staff and the nurse is murdering the best students of the school to collect the parts to recreate her as the best fighting monster possible. 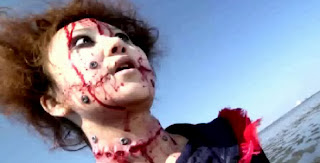 This write up doesn't even begin to do justice to the complete insanity of this thing. From the opening scene of over the top of comedic slaughter to the scene in the classroom where we meet the students which is the most racist thing I have seen in a movie since THE ETERNAL JEW. There is a subplot about a group of girls who have remade themselves a faux Black girls by wearing make up and fake afros and big cup lips and giant spears and every other horrible stereotype and racist thing you can think of. I guess I can reason it out as to be a commentary about people trying to go to extremes to be people who they are not. But my god it is terribly extreme and offensive. I guess that is the point. 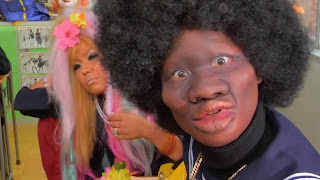 There is also another subplot about ritual cutters, a group of teenage girls who cut themselves to be part of a group. They end up in a competition of who can cut themselves the most and best, complete with a trophy. The girls are all anemic and eat cabbage to keep up their strength.

But the meat of the movie is the battle between the girls. It becomes a big F/X battle with body parts switching places, blood becoming solid becoming actual weapons. It really is the epic battle the directors set out to achieve, even if it is kind of stupid. With severed arms becoming spinning rotors to make people fly and things like that. Frankly this movie would probably work a lot better if you were really really high. I rarely say that since I am not a stoner, but in this case, well it fits. 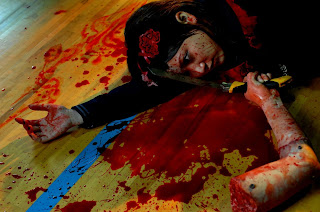 I was a big fan of TOKYO GORE POLICE because with all the insane imagery, way over the top gore, and bizarre psycho sexual set pieces, there was a strong political and social subtext tying it all together. With VAMPIRE GIRL VS FRANKENSTEIN GIRL it is almost like they set out to make some really weird teen movie and are only lightly touching on any kind of social context at all. The stuff that makes that other movie hang together is mostly missing here,and that is a shame.

I'm not a fan of the new Japanese insane cinema like MACHINE GIRL or ROBOGEISHA with cute girls with machine guns pupping out of their assholes and thousands of gallons of blood. That shit is amusing for about a minute but then the twelve year old in me starts asking for a context for it and gets severely disappointed. TOKYO GORE POLICE had the whole package. This movie almost has it, then goes back to the candy colored insanity. It is never boring for sure, but it is pretty empty unfortunately.