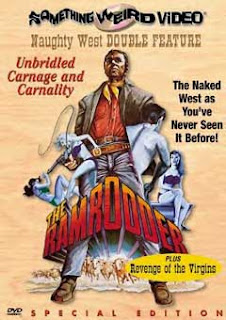 This Nudie Cutie sexploiter from the era right before hardcore ejaculated onto movie screens everywhere is just barely memorable as an oddity for the onscreen appearance of Manson family killer Bobby Beausoleil - literally months before he committed the murder of Gary Hinman and was picked up by the cops. This movie was mostly shot on and around the soon to be infamous Spahn Ranch, which at that time was inhabited by Charlie Manson and his clan of hippie drop-outs who were planning the race war to end all race wars but would instead ultimately lead to the blood bath that ended the sixties.

But the film itself is a flimsy excuse to show tons of titties in various states of undress. Our hero Rick Thompson (Roger Gentry) is coming home from a Cattle round up in the old west, and is distracted by a half dozen Indian maidens bathing in a stream. You can tell they're American Indians because they all have feathered head dresses on (and nothing else). He watches them wistfully for about seven or eight minutes while the babes frolic, showing the same shots of their bouncing breasts and water beaded behinds over and over again. All the while the music is a threatening thriller styled riff that doesn't match the movie at all. Finally one semi sentient Squaw sees the grizzled white dude standing clearly out in the open gawking at their flesh and they all high tail it out of there. He heads on back to his cabin where his red headed babe (LucyJulia Blackburn), is waiting. They have what amounts to sex, when the censors will not allow any humping on screen. Rick does have a lot of pimples on his back and upper arms, though, and the lack of thrusting and humping leaves the viewers mind to wander if those babies are gonna burst on screen.

Later, Rick mozies on down to the local Indian encampment to tell the Chief that the local government has decided that the land they are on has now been declared a reservation and that the lucky Indians can now legally stay there for good! Thanks whities! The Chief gives Rick a medallion for being a friend to the tribe. Right after he leaves we see the "dance of the virgin" for local Squaw Tuwana (Kathy Williams) which is meant to excite the fellas into one of them taking her as a bride. But Brave Eagle (Robert Aiken), the Chief's son, gets the hardest boner for her and plans to take her for his own. When she lets him know it is against tribe law to take a virgin against her will, he tells her that she needs to "learn obedience" while threatening her with a bullwhip! 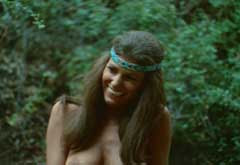 All of us on the reservation have access to superior dental care and breast implants. Thank you Uncle Sam!!!
When Rick is riding out of the camp he is attacked by a crazy white dude who is missing all of his upper front teeth (Bobby Beausoleil). They fight and the bandit knocks out Rick, taking his money and the medallion he was given. He then finds another squaw in the woods and chases her down (topless of course), rapes (off screen) and kills her. When she is found, the Indians naturally think Rick is the murderer. But he can't be, because while it was happening, Tuwana had found Rick and was overtaken by the fact that his Honky peeping self had ogled her in the stream earlier and decided to give up her V-card to him in that same dirty, bug infested stream. Rick nearly breaks her arm while hoisting her up so the camera can see her breasts while they fake the hippity dippity. 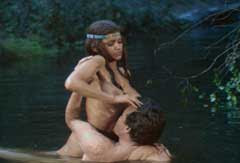 Rick's love making skills could use a little finesse...

The camera goes out of focus every time they get too close to it; apparently the focus puller has dozed off, or slipped off to the Spahn Ranch to get high that day. More of the pissed of Indian braves go on the hunt for Rick, while several others decide to go on a kill whitey rampage to show them who's boss, raping a random white chick along the way. Tuwana and Lucy get into a knife fight that involves more tittie rubbing that actual knife fighting, and Lucy does her version of the "dance of the virgins" for Brave Eagle, except way more slutty as she awakens her sexuality to save her man's ass. Tuwana gets to taste that bullwhip and realizes she likes it, but still has time for a lesbo tryst as well, and the Chief never moves from the spot he has stood in for the entire film.

The Ramrodder is a hippie, liberal, nudie, sex, cowboy movie that happens to feature a convicted murderer as the main villain. For all the soft focus nudity, there is a lot of verbiage given to equity of the races, and anti-violence speeches. It is all very late sixties maaaaaan, what with the women discovering the sexuality as an important force of nature and no man having the right to take another life (unless he is castrating a rapist that is!). Which makes all the other crap in the movie all that much more hilarious, such as the fact there are no actual American Indians in the movie. Every single person in the film is a white person, either poorly painted up to look Indian (the Chief is just in brown make up) or they didn't even try at all (several background Indians are just hippies in jeans and headbands!). Robert Aiken who plays almost looks like he could be American Indian, if he just crossed over the border from Tijuana, and Brave EagleKathy Williams looks about as ethnic as her name sounds. Even better is that no one at all attempts an accent, except for the pathetic Indian speak, which seems to include random Spanish and Italian words thrown in for good measure. I was waiting for someone to say burrito or spaghetti.

I'm going by memory here, but it seems like I recall this movie being discussed in the film MAU MAU SEX SEX (Dave Freidman released this theatrically, hence why SOMETHING WEIRD put this out) and that they said the director was actually Lee Frost. Which explains the extended whipping sequence, which is in almost all of Lee Frost's films and was apparently a kink of his that he made sure to include. Finally, it is kind of weird to see Beausoleil getting castrated on screen considering what he would be doing to Gary Hinman just a few months after this movie was shot.

The SOMETHING WEIRD DVD has the co-feature REVENGE OF THE VIRGINS and a whole bunch of shorts and trailers including Lenny Bruce's classic animated THANK YOU MASKED MAN!

The Tittie Fight from THE RAMRODDER